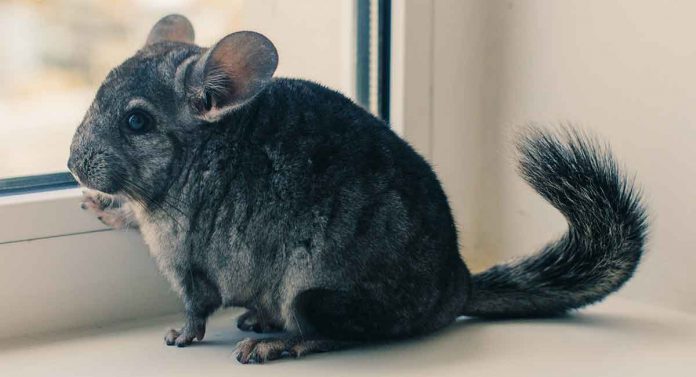 Their silvery-gray color has become more and more popular since it first arose years ago.

But, besides their beautiful coloring, what really distinguishes a sapphire chinchilla from others?

Are they just a different coloration, or do they have other differences, such as health or behavioral issues?

Are they healthy creatures? And, perhaps most importantly, do they make good pets?

Knowing the answers to these questions is extremely important.

After all, you should be well-informed about any pet before adoption. It’s vital to make sure that you can provide it with a good home and meet every need.

To help you in this task, here’s a complete guide to the sapphire chinchilla.

What exactly is a sapphire chinchilla? Where did it come from?

The story of the sapphire chinchilla starts in South America.

There are actually two different types of chinchillas. The sapphire chinchilla belongs to a specific species called the long-tailed chinchilla.

This is the most common domestic and wild chinchilla.

In the wild, this species of chinchilla comes almost exclusively in a gray coloring.

While other colors do occur, they are extremely rare.

In captivity, however, humans can control a chinchilla’s breeding pattern and match chinchillas together to create rare coat colors.

The sapphire chinchilla is the result of such a pairing.

Basically, the sapphire chinchilla is the result of a diluted gene on a gray chinchilla.

This diluted gene makes the color less apparent, which results in the blue-gray color the sapphire chinchilla is known for.

Because the diluted gene is recessive, both parents must have it in order for their offspring to be sapphire chinchillas.

This makes sapphire chinchillas somewhat rarer that other colors.

Their coloring differences do not seem to have much of an impact on their behavior, aggression levels, or tameness.

In other words, their coat is purely aesthetic and does not affect them in any way.

Like most chinchillas, they are very active creatures and can be fun to watch as they explore and play.

Some will become used to being handled with regular practice, but others might always prefer to be out of your hands.

Chinchillas are great, playful pets. But if you’re looking for a pet to snuggle with you, you should probably choose a different animal to welcome into your home.

While they might look cuddly, most chinchillas would much rather be running around and exploring than snuggling.

However, if you do decide that a chinchilla is the correct pet for you, then the sapphire chinchilla can be a great choice.

Like all chinchillas, sapphire chinchillas are prone to a few health problems.

It is important to be aware of these problems both before and after you adopt your chinchilla.

Knowing what to watch out for during the adoption process will help you choose a healthy chinchilla.

The main health concern for sapphire chinchillas involves their teeth.

The domesticated chinchilla suffers from a wide range of dental problems.

Dental disease is a result of both environmental factors and genetics.

This means that it is important to adopt your chinchilla from a reputable breeder. Make sure that no close relatives had serious dental problems.

However, healthy genetics are not enough to prevent your chinchilla from getting dental disorders. Proper care is extremely important.

Out of all the factors involved, it is likely that diet plays the largest role.

Chinchillas constantly grow their teeth. In the wild, their teeth would be worn down consistently through their everyday eating.

This is often not possible in captivity where they are commonly given an inappropriate diet.

Your chinchilla should be consuming mostly hay, which will help keep their teeth at an appropriate length and prevent dental disease.

Gnawing substrates might also be helpful in preventing early dental disease, though extensive research has not yet been done on the effectiveness.

Sadly, most dental disorders are not properly diagnosed in chinchillas until after they have already passed away.

However, technology is currently being developed to help detect these abnormalities so they can be properly treated.

While teeth problems are by far the most common, other health problems can potentially develop.

Because they are very active, chinchillas are also somewhat prone to fractures.

This is most common when the chinchilla is left alone outside of its cage or when its cage is not properly prepared.

Chinchillas do usually love to jump, which can obviously get them into a lot of trouble in a modern household.

Convulsions can also occur, though these are caused by numerous factors and diseases.

They can be the result of a brain problem, dietary deficiency, or some kind of injury. For the most part, these are better prevented than treated.

Infectious disease can occur if the chinchilla’s cage is not kept clean or if the temperature is not appropriate.

Chinchillas are very sensitive to changes, including the introduction or removal of other chinchillas, a change in diet, or a sickness.

Stress can easily cause a chinchilla to stop eating and make them susceptible to other diseases.

Handling is very important at this age. Without it, chinchillas can become unsocialized and might reject being held altogether.

Chinchillas are generally weaned from their mother at 8 weeks of age.

If you are adopting a chinchilla, you will not be able to adopt it until this point.

Sapphire chinchillas are not all that different from any other chinchillas.

They do have a very beautiful coat color, but besides that, they act like any other member of their species.

Do You Have a Sapphire Chinchilla?

Let us know about your pretty pet in the comments! 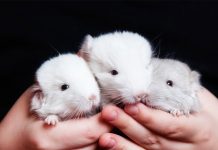 Your Pregnant Hamster – How To Care For Her During Pregnancy...

Gerbil Vs Hamster – What’s The Difference And Which Is Best...

Why Do Rabbits Dig In Their Litter Box?