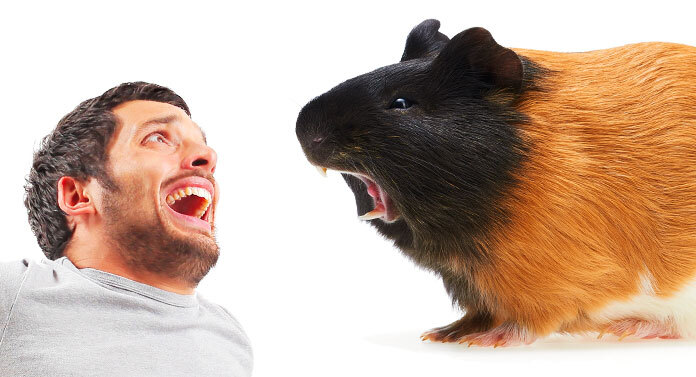 Why do guinea pigs chatter their teeth, and how do I stop them from doing it!

If you’ve just heard your guinea pig chatter its teeth for the first time, you were probably a little surprised.

This low, protracted clicking sound is fierce. And that’s exactly what it is designed to be.

Your guinea pig is giving a message, to keep your distance.

Why do guinea pigs chatter their teeth?

Guinea pigs chatter their teeth as a warning. This noise is meant to let other animals know that they shouldn’t come any closer.

It’s their equivalent of a dog’s growl, if you like.

A threatening noise, intended to tell the potential intruder that they are not welcome and intrusions will have consequences.

But why do they want to keep you or their friends away?

There are a lot of things that can make a tiny rodent chatter their teeth, but the four most common are:

And there are a few overlaps in these categories.

So let’s take a look at what might be bothering your furry friend, and how to help her.

It is not uncommon for guinea pigs to fight sometimes, or to take a disliking to one another.

When you first introduce guinea pigs it’s sensible to do it in a neutral place, with a barrier between them.

If your guinea pigs chatter their teeth through the barrier, then you know that you need to keep those meetings careful for a while.

Your guinea pig’s world is entirely controlled by you, and there is a limit to the things within it.

That includes things that are very valuable to a guinea pig.

Like food, water, chew toys and places to hide.

If you have more guinea pigs than resources, then they are going to guard them. To keep them for themselves.

An aspect of this display is making that distinctive teeth chattering sound.

Using it to try to make their companions afraid to come near their precious resource. Whether that’s the food bowl, water bottle, toys or hides.

The solution to this is to make sure that you have one each of everything your guinea pig might value.

Then even if they guard one of them, your other pigs will have access to other options and they won’t need to fight.

Rodents are nature’s prey animals, and to keep themselves safe they have to spend a lot of the time hiding or watching for predators.

They are also vulnerable to other guinea pigs. Not only can they end up fighting for resources, but for their very survival.

Which is all pretty scary!

When they are afraid, a guinea pig will often try to either escape or hide.

But if this is not an option, say you are holding onto them or they are in an empty cage, they will make a more bold display to try to scare away the source of their fear. You!

This noise is intended to make you, or whatever is upsetting them, leave them alone.

It’s a warning, and it’s not one without a follow up.

Because although they rarely do bite, guinea pigs are absolutely capable of doing so if pushed too far.

If your tame, regularly handled guinea pig has suddenly started chattering her teeth at you or her companions, then there is possibly another cause.

This relates back to fear, as ultimately this pain is what is making them afraid where they weren’t before.

Guinea pigs like so many other animals are quite good at hiding when they are in pain.

It’s a natural response to make them less likely to be predated when unwell.

But an unintentional side effect of this is that it can be hard to spot if they are in need of medical treatment.

For this reason, changes in behavior should be taken seriously.

Keep an eye on your pet

If your guinea pig starts chattering without an obvious cause, scoop her out of her cage and very gently rub your hands over her.

If she squirms in a way she wouldn’t normally or squeaks, this is another sign that something might be up.

Runny noses and sneezing are other common signs of illness in our piggies.

But even without other signs, it pays to take a guinea pig to the veterinarian for a check up if they suddenly start chattering their teeth with no obvious environmental cause.

Hopefully resolving the medical problem will reduce their pain or fear, and help them to feel at ease in your company again.

Why do guinea pigs chatter their teeth?

Guinea pigs chatter their teeth as a warning. It is a sound designed to keep other animals away from them.

They can make this sound through fear, aggression, pain or illness, but the intention is the same. To warn you to keep your distance.

Although guinea pigs aren’t often physically aggressive, they do have the potential to be if they choose.

So it’s important to work out why your guinea pig is chattering her teeth, and to help put her at her ease again.