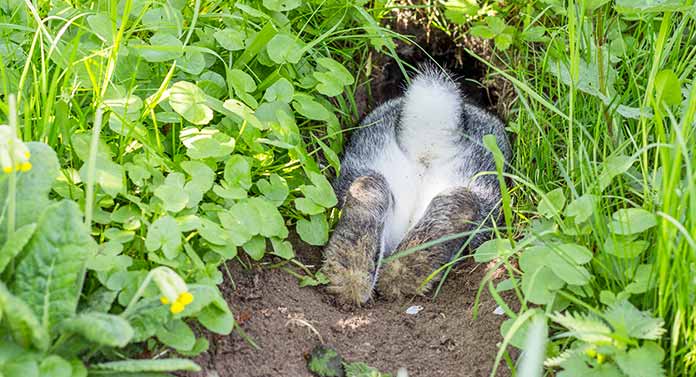 Ever wondered “why do rabbits have tails?” Rabbits have shorter tails than most mammals, with a shock of white fur underneath. Rabbits’ distinctive tails help them escape from predators and also work as an alarm signal to other rabbits from their warren. So far from being small and insignificant, rabbits’ tails are actually a rather special and important part of their anatomy!

Most animals have tails of some description. In fact we humans are pretty exceptional for not having one! Across different species, tails have adapted differently to provide the best survival advantage. For example some monkeys have prehensile tails to help them climb, and cheetahs have long muscular tails to help them balance and steer at full sprint.

Rabbits’ tails are usually short, fluffy and white underneath. None of these qualities are a coincidence, and they all help rabbits out in some way. Let’s see why!

Do Rabbits Have Long Tails?

Compared to most mammals, rabbits’ tails are pretty stumpy. They have just 15 or 16 caudal vertebrae (tail bones). Compare that to cats, which have 22 or 23, and rats, which have a whopping 31 to 36!

From an evolutionary perspective, species tend to adapt by losing tails rather than gaining them. Or in other words, the early ancestors of rabbits probably had longer tails, like most other mammals. So why did they lose their long tails and end up with short ones instead?

Why Do Rabbits Have Short Tails?

In the wild, rabbits dig a warren of underground tunnels and chambers to rest in, which they often share with several other rabbits in a social group. When a predator approaches while they’re grazing above ground, they escape into their warren as quickly as possible. If they had a long tail, the predator might be able to grab it and pull them back out as they try to get to safety.

In the past, rabbits’ ancestors with the longest tails would be more likely to get caught and killed this way. While those born with shorter tails would have a higher probability of escape. The shorter tailed individuals would go one to have more opportunities to reproduce, and pass on their short tails to the next generation. So that gradually over thousands of years of evolution, rabbits’ tails got shorter, and shorter.

Why Do Rabbits Have Fluffy Tails?

Is your rabbit’s tail just the cutest and the fluffiest? Tails don’t just come in different sizes, they have other differences in their appearance too. Rabbits’ tails are covered in the same plush coat that covers their body.

The wild type coat is short and smooth, but domestic rabbit varieties have been bred with long coats and even wavy coats instead. The fur on their body and tail doesn’t just keep them warm, it protects their skin from damage too.

For example, bumps, scratches, and near misses with predators which could break the skin and create a place for infection to enter the body are all more likely to glance off a fur coat without doing any lasting damage. And of course, it’s the fur on a rabbit’s tail which carries one of their most instantly recognizable features – the white underside!

Why Do Rabbits Have White Tails?

Most rabbits have white fur on the underside of their tail. When they’re resting or feeding, it’s tucked out of sight. But when they run, it flashes skywards with every hop. It sounds like it should draw attention to them, and make them more visible to predators, doesn’t it? But here’s how it works.

When a rabbit runs away, the white flash of their tail distracts the predator from the overall outline of the rest of the rabbit. So they end up trying to track a much smaller target. Rabbits also run in zig zags as they flee, rather than straight lines.

This means their white tail disappears and reappears from view, changes size depending on the angle it’s viewed from, and changes direction. All of this forces predators to constantly re-evaluate what they’re seeing and try to make sense of it. And these tiny moments of confusion add up into precious seconds which the rabbit can spend getting away.

A rabbit’s flashing white tail serves another purpose too. It tells other rabbits from their social group that there’s something dangerous in the area – something worth running away from. So they can escape too, before they’re even spotted!

Taking Care Of Your Bunny’s Tail

We’ve seen how, far from being small and insignificant, rabbits’ tails are vital for surviving the perils of being a prey species. Hopefully our pet rabbits will never have to worry about injuries, or escaping a predator, or sending warning signals. But we still owe to them to help look after one of their greatest assets!

When baby rabbits are born, the bones in their tail are still soft and delicate. They don’t harden (ossify) until the kit is two weeks old. Very occasionally, one or more tail bones become fused together during development. This is usually an inherited condition, and more common in large breeds, such as the Flemish Giant.

The fused vertebrae can cause the tail to sit at an abnormal angle, so the white underside is always visible. It might also cause some discomfort – a vet can assess this.

It’s important to make sure your bunny keeps the area underneath the base of their tail clean and tidy. If they are old, overweight, or have a long coat, they might need your help doing that.

If urine or feces are allowed to dry in their fur, it becomes an inviting spot for flies to lay their eggs. When the maggots hatch, they start to eat the rabbit’s skin and flesh. This is known as myiasis, or flystrike. It’s both very painful, and difficult to treat!

Rabbits have white tails to confuse predators and buy themselves valuable escape time. The white tail flashes of a fleeing bunny also send a warning signal to other rabbits in their social group. Rabbit tails are short, because this makes it harder for predators to drag a rabbit back out of their warren.

What kind of tail does your bunny have?

Does your rabbit’s coat include a striking tail? Tell us about it in the comments box down below!