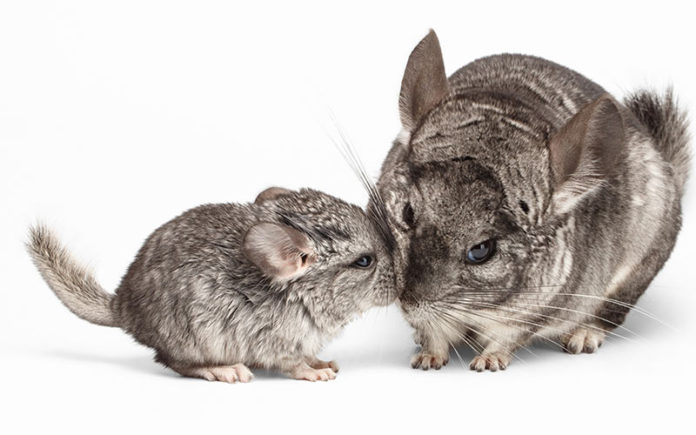 Are you worried about your chinchilla getting lonely? Do you want him to have a friend to snuggle up to? Let’s find out the answer to that important question – can chinchillas live alone? And what should you do if your chinchillas are fighting.

Nothing is more cute, cuddly, and furry than a chinchilla. If you have one of these medium sized rodents, then you likely know just how soft a chinchilla can be.

Chinchillas have a whopping 60 hairs per follicle, so this explains their soft and fluffy nature.

And if you have the patience to calmly introduce your chinchilla to your touch, then the rodent will love to cuddle you back.

Since chinchillas love social interactions once they are well acclimated to human touch, you may start to wonder if your rodent friend is lonely when you are not home.

Well, we explore just this very issue in this article. Finding the answer to that important question – can chinchillas live alone?

Before looking at whether or not chinchilla pets should be housed together, let’s consider how wild chinchillas live. 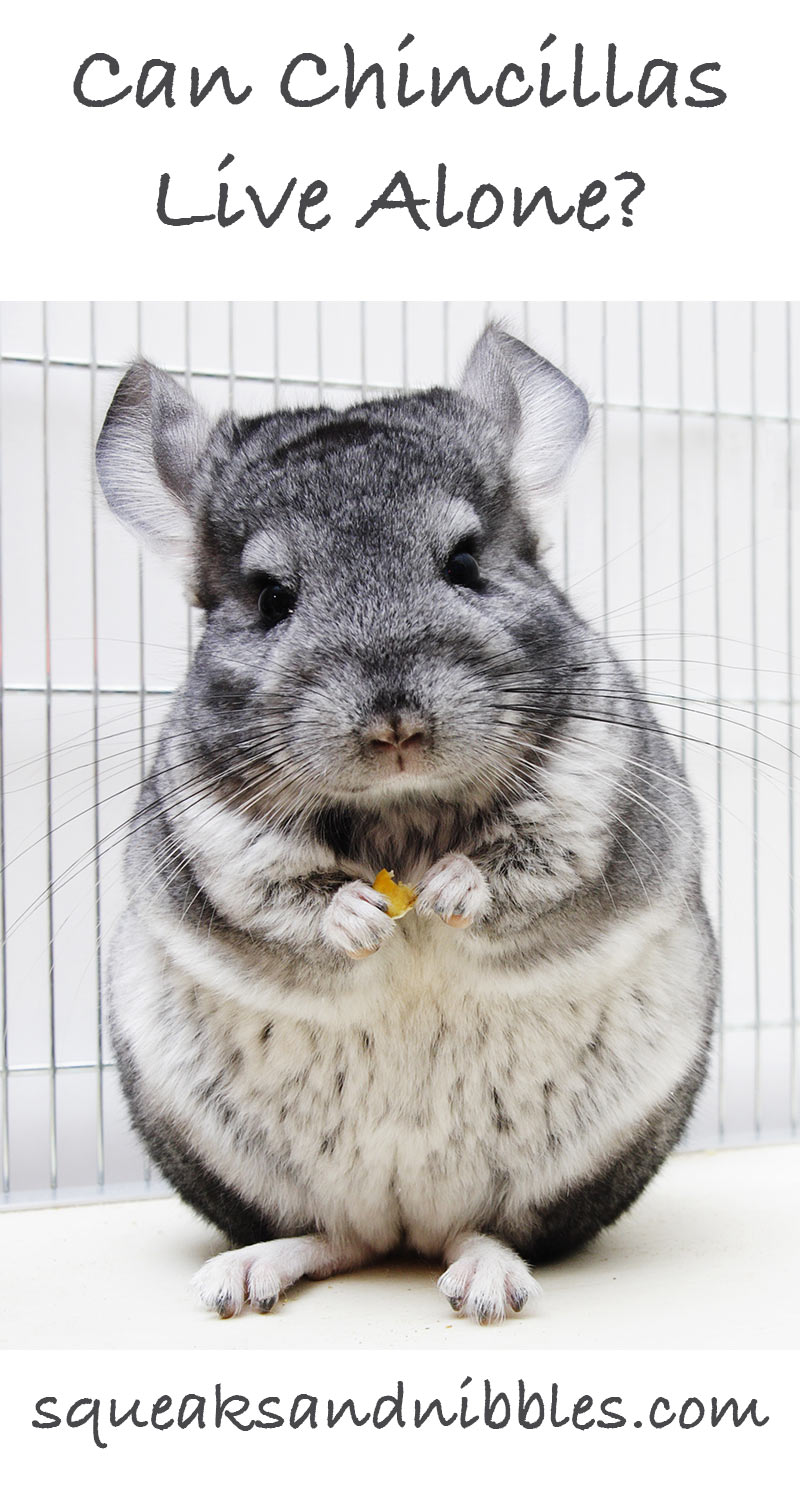 Chinchillas are rodents that live in the crevices along mountainous rock formations and in small burrows close to rocky areas.

The animals are native to the Andes Mountains and have lived across the mountains covering the south american countries of Chile, Ecuador, Colombia, Peru, and Bolivia.

Chinchillas have long been hunted for their fur, and the wide sprawling habitats of the rodents have shrunk considerably to include only the mountainous regions of Chile.

While the wild habitats are much smaller than when the Incas first used their fur for warmth around 1100 AD, the animals still live in the same types of herds they always have.

Chinchilla herds are actually quite large with as many as 100 of the animals living together.

Herds provide the rodents with protection from predators and they allow for social interactions.

In fact, chinchillas in their natural and wild herds will adopt certain social “roles.” The most common of these roles is the look-out or guard chinchilla whose job is to watch for danger as other members of the herd sleep, play, and eat.

Since chinchillas are well adapted to life in herds, they can definitely enjoy a companions when they are kept as pets.

Just because wild chinchillas life in herds or colonies does not mean that they absolutely need to be kept in pairs or groups.

After all, wild dogs live in packs, rats live in groups called rascals, and guinea pigs have their own groups. However, all of these animals are able to live on their own happily with their human caretakers.

While this is true, even animals, such as cats, that enjoy their solidarity in the wild, can enjoy companionship with other cats.

When it comes to pets, it really depends on the animal and how much time you have to dedicate to social contact.

Since chinchillas are naturally social animals, they do require a great deal of interaction from you.

However, chinchillas are crepuscular animals, meaning they are active in the hours before damn and just after dusk.

If you have plenty of time in the evening after work or school, then you may be able to find an hour or two each day to dedicate towards your chinchilla when he is awake. If this is not an option, then you may want to think about adopting a chinchilla companion.

How To Introduce Chinchillas

You probably already know that you cannot simply introduce two animals and expect them to get along. Introductions take time and patience. After all, you would want to learn a little about a potential roommate before signing a lease with them. 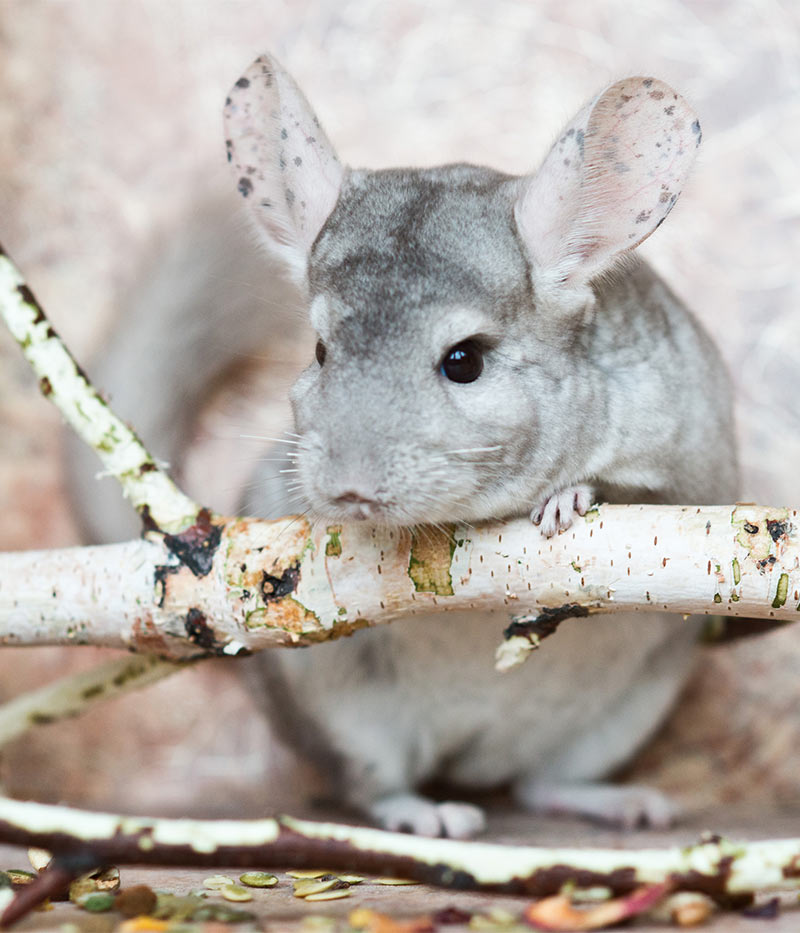 Once you purchase the cage, place the new chinchilla in it. Set the cage in the same room with your other chinchilla, but make sure the cages are at least a few inches to a foot apart from one another. Allows the rodents to smell one another through the cages to get used to each other.

After a week, you want the rodents to start accepting each other’s scents. There are a few different things you can do. You can switch the cages without changing the bedding or you can allow the chinchillas to share a dust bath.

Dust bath sharing is easier than cage switching. Simply place a bit of the sand bath in a container and let one chinchilla use it. When he’s done, let the other use it, and then return the bath to the first chinchilla.

Have your chinchillas share a bath for three to five days. Afterwards, allow the rodents to spend some out of cage time together. If the chinchillas seem to be getting along, then place both of them in the larger cage together.

There is a chance that your chinchillas simply will not get along with one another.

This is common if you are trying to pair two females together as they are more territorial than males.

However, males are more dominant and this can cause fights if both rodents want to be the dominant male in the pairing.

There are some obvious signs that you will see if your chinchillas are fighting with one another. First of all, you should know that fights are not particularly dangerous.

Chinchillas have shorter and softer nails than other rodents and they rarely bite. The animals will jump and charge at one another though.

While the fighting itself may not be harmful, it should be noted that chinchillas can become withdrawn and may stop eating or drinking if they are fighting with one another. The animals may be jumpy and appear anxious or stressed.

Simply put, your pet will be depressed, fearful, and upset, and rightfully so!

This is a normal reaction, especially for prey animals, like rodents, who are naturally cautious and hesitant when it comes to their surroundings.

Physical fighting is the easiest thing to spot, and one animal will usually be the aggressor who charges and jumps on the other.

Chinchillas will also make barking nosies if they are not happy with one another. You will hear noises from both animals typically, regardless of who is the aggressor.

Believe it or not, chinchillas have about seven distinct calls, according to research studies. Four of the noises are used to communicate either offensive or defensive behavior, so keep your ears open.

If one of your chinchillas is fearful due to aggression shown by a cage-mate, you may notice missing hair.

Hair loss may be caused by something called slip fur where chinchillas release patches of their hair. This is a defensive mechanism used by the animals to get away during a chinchilla fight or another type of situation.

Hair loss issues can also be caused by bacteria, fungal, and parasitic infections as well, so it is wise to seek out veterinary care if you notice the issue.

An exotic or small animal specialist can investigate the issue and let you know what the cause is.

Chinchillas Fighting – What Shall I Do?

If you think your chinchillas are fighting, then it is best to separate them as soon as possible. Some chinchillas simply do not want to be paired together. While this is true, some rodents are content with having a mate who lives next to them. In fact, chinchillas often like this arrangement and you may find your pets happily cooing at one another from the safety of their own little territories.

Do not feel bad if your chinchillas fight. Simply separate them and try again with another play sessions a few weeks or months down the road to see what happens.

Separation is also ideal if your chinchillas suddenly start fighting with one another after living peacefully in the same cage. This is something that commonly happens if one of the animals becomes ill.

This is a sign that both of your chinchillas should see a veterinarian as soon as possible.

After all, some ailments, like bacterial respiratory infections, can easily be transmitted from one chinchilla to another.

If you are lucky, then your chinchillas will be happy to meet and play together. There are some pretty telltale signs that your pets are getting along well.

There are a whole range of noises you are likely to hear too, and they are distinct from the loud, abrupt, and aggressive barking nosies that chinchillas make when they fight.

Low and gentle chirps and grunting sounds are common. Be prepared to hear different tones and durations as the animals communicate with one another.

As the animals get to know one another, they will jump together, chase each other, and play with toys that are provided to them.

According to research conducted on chinchillas kept in captivity, chinchillas do not spend a lot of time playing.

The animals spend much more time feeding, resting, and displaying comfort-seeking behavior. In other words, if your chinchillas play for a bit and then seem to ignore one another, then this is completely normal.

Bonded chinchillas will be much more social with one another. They may rest and sit side by side, and you might see the animals touching and napping with their eyes partially or full closed.

The animals will also groom each other and you may see your chins gently biting one another. This is often called nibbling and it is a sign of affection. Of course, when one of your pets is a little too forceful with the grooming, you may hear a bit of a squeak or a grunt.

If you do not see your chinchillas “bonding”, you should not be too concerned. The animals are most likely to bond at a young age and the rodents typically bond with family members. If you do not see any close social interactions, then it just may not be in the cards for your animals.

Can Chinchillas Live Alone – A Summary

Chinchillas are wonderful and cuddly pets, but you may be concerned about your rodent friend if you are not always around to interact with him.

Well, some chinchillas are fine living on their own, while others enjoy the companionship of another chinchilla. Of course, some animals also enjoy close contact, and others want their own space.

Your chinchilla’s personality will dictate what he wants, and you may or may not be able to house two of the pets together.

Thankfully, there are some ways to safely introduce chinchillas and there are some pretty straightforward signs that the rodents are getting along with one another. If you want to know more about adding another chinchilla to your home, then it is best to speak with your veterinarian about what is wise for your specific animal.

Do you have a bonded pair of chinchillas that adore each other’s company, or are your familiar with all of the various sounds that your chins make? We want to know, so make sure to let us know in the comments below.