I have full blown arachnophobia, and I have had it as long as I remember. It is therefore a constant source of amusement to my family that I adore tarantulas and obsess over learning about them in the same way I do with mammals and reptiles. So how come I’m so able to separate these arachnids so dramatically? It’s because, to me and in real biological terms, these arthropods are surprisingly different.

There are thousands of arachnids, and although some have venom that packs a nasty punch, they are universal in not wanting to have to use it. Most tarantulas are docile, hiding from humans and running away rather than attacking if pushed. And generally spider species are the same. Although both sets have exceptions to that rule. And you’ll find different baseline personalities in new and old world tarantula groups.

In almost all cases, an adult Tarantula is larger than an adult spider. Although there are some dwarf tarantula species and huge spiders that throw you off from time to time.

All arachnids are built of two segments and have eight jointed limbs. Their two body regions are joined by a narrow waist, and they shed their solid exoskeleton as they grow. Although tarantulas tend to be chunkier than most spiders, not all of them are. There are some broader spiders, like the wolf spiders, that look very much like their true tarantula cousins.

One of the coolest, craziest things about tarantulas is their urticating setae or hairs. All tarantulas are hairy, but not in the fluffy cuddly way despite some appearances. Those hairs on their legs and backs are used to kick off at predators. Some even spread them around their burrows as a first line of defense. Spiders don’t do this, and only some of the species have hairs at all.

Most spiders and tarantulas have eight eyes. Some spiders have great vision, like jumping spiders. But all tarantulas have poor vision and instead rely on the hairs on their legs to sense what is around them.

If you’ve got a pet tarantula you’ll notice that the most you see of some species is a blur as they shoot back into their burrow when you open the door. You’ve not even got near the tank and they’ve sensed your presence already through the air movement on their hairs.

The direction of your arachnid’s fangs are a clue. Tarantulas’ fangs point downwards, whereas spiders are in a more evolved sideways position.

Tarantulas and spiders have different methods of hunting for the most part. Tarantulas are opportunistic hunters – insects, small reptiles, amphibians and occasionally even smaller mammals make up their entire diet. They are also quite cannibalistic.

Spiders mostly eat meat too, but they might also chow down on nectar, seeds, leaves or tree sap. You’ll never catch a tarantula chomping anything that isn’t 100% protein.

Both spiders and tarantulas build webs, but only one uses them to trap food. Spiders use their 6 spinnerets to make elaborate traps for their prey. Tarantulas use 2 or 4 spinnerets to build webbing for burrows, dens and trapdoors.

When mating male spiders of both types are in danger from the female when they are finished. Although fairly horrific to us as owners, the potential mother does seem to be more likely to produce a fertile sack when she’s had a good meal…

Both tarantulas and spiders lay eggs that are bound in a web egg sack during development. However, as they are largely terrestrial tarantulas’ egg sacs will normally be kept in a guarded burrow, whereas most spiders will keep them in the corner of their aerial webbing.

Tarantulas grow really slowly and often change color along the way. Frustratingly slowly for anyone who picked up a spiderling sling in the last few months. You might wait literally years for your pet to get fully grown. Spiders develop much more rapidly.

There is a big difference in lifespan between tarantulas and spiders. Your average spider will live for a year or two if it’s lucky. Tarantula females live up to 20 years, although males are significantly shorter lived. Especially if mated!

What is the Difference Between a Spider and a Tarantula?

Tarantulas tend to be larger than spiders, grow up more slowly and live for a longer time. Their fangs point in a different direction, and they eat a different diet to some spiders. They have a varying number of spinnerets between them, and use their webs for very different purposes. 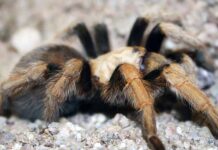 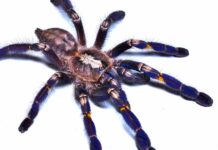 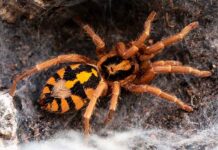 Why The Pumpkin Patch Tarantula Is Such A Popular Pet