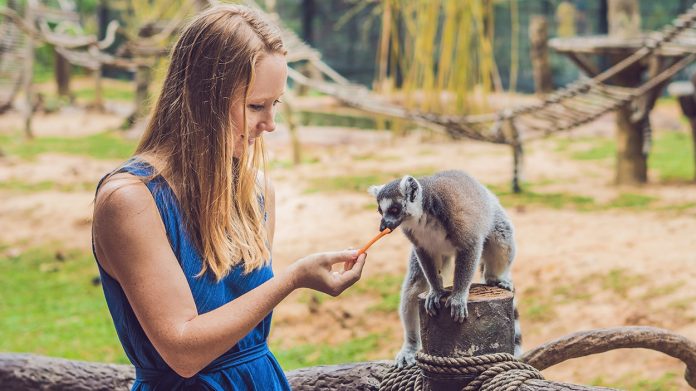 Can you own lemurs as pets? Do they settle in nicely, or is it not as simple as it seems. Are exotic pets ever a good idea?

On top of that, the question of animal welfare and owner preparedness enter the picture, leading to a very public, often contentious debate.

Not up for debate is the undeniable appeal of exotic animals such as lemurs, big cats, gargantuan snakes, and others.

Exotic animals seem to be overtaking designer dogs as the pet du jour for celebs and trendsetters. Who wouldn’t want a ring tailed lemur pet swinging from the chandeliers?

Gossy mags are filled with pictures of exotic animals lounging in living rooms and draped on expensive cars. Plus we can get up close and personal with these creatures at the zoo or animal park.

As a result, the easy conclusion is that keeping a lemur pet is doable.

If rapper So-and-so or celeb What’s-her-name can own one, why can’t I, right?

Unfortunately not! While we can interact with lemurs at the zoo, exotic animals require a lot more than just room and board, petting and kibble. There are also laws in some areas prohibiting you from owning them.

After all, zookeepers usually need a college degree in biology or wildlife management just to care for these animals properly!

Do you know what a lemur’s temperament is like? How about its dietary requirements? A run down to Petco just won’t cut it; there’s no such thing as a lemur aisle.

Can you have a lemur as a pet?

Laws about exotic pet ownership vary from state to state, and are always in a state of flux regarding what animal at what time is acceptable. This map is a good starting point for determining whether or not a lemur fur baby is in your future.

One look will tell you that the answer to, “Can I have a lemur as a pet?” is, “Probably not.”

Only five states have no existing law regarding keeping a wild animal and most states ban residents from owning some or all exotic pets.

Of course if you want to further investigate the issue, contacting your local health department or animal control agency is a good way to determine: are lemurs legal pets? Or maybe even how to get a pet lemur.

But once you hear what we have to say about these adorable creatures, you may not want to bother!

Can lemurs be pets?

That’s not because lemurs aren’t beautiful, cunning creatures. They are definitely among the world’s most attractive and enticing animals.

But having a lemur pet in your house is a complex proposition!

Lemurs are primates indigenous to Madagascar, with the ring tailed lemur (Lemur catta) being the best-known among the 100 or so species. Circa 1758 the preeminent scientist Carl Linnaeus named the genus, although there were only three species included at that time.

Lemurs are a diverse, mostly tree dwelling group with some outstanding jumpers among them, namely the acrobatic indris. These lemurs use their powerful hind legs to jump from tree to tree.

But it is the friendly, highly entertaining Ring tail species that most of us are familiar with due to their high visibility at many zoos.

Ring tailed lemurs weigh an average of 6 pounds and reach about 18 inches tall. They have one-of-a-kind, long and striped black and white tails, and bright yellow eyes that seem to see right through us!

Are lemurs good pets? The answer is no. If you’re thinking about bringing one home, stick to the stuffed animal kind.

Ring tailed lemurs are an endangered species, so wipe away any thoughts you may have of making one your roommate!

In fact, the International Union for Conservation of Nature (IUCN) says that lemurs are among the world’s most endangered animals. According to the IUCN Red List almost 90% of the various lemur species may be extinct within the next two decades.

Why are these precious animals in such dire straits? Their numbers are decreasing in part due to illegal logging that wipes out their native habitat, being hunted for meat, and the illegal exotic animal trade.

A complicated political socio-economic climate makes it difficult to address conservation issues in their homes.

Still, that doesn’t mean that we can’t admire and support these ingeniously delightful animals.

Later on we’ll address the numerous ways that you can help this endangered species, without ever having to spruce up that extra bedroom with a tree or three, or lay in a supply of Madagascar leaves and insects, all in the name of welcoming a lemur into your home!

What do lemurs eat?

But first let’s get a bit more acquainted with the lemur, in the name of better understanding what meeting their needs and demands would entail (if you’re still entertaining the thought of having one as a pet!).

What do lemurs eat? Overall these primates enjoy a preponderance of fruits and leaves, but again preferences vary among species.

For example, the hairy-eared dwarf lemur is blessed with a long tongue that is ideal for stealing nectar.

In contrast, the aye-aye lemur has rodent-like teeth that never stop growing, making it a pro at cracking into hard seeds and extracting the goodies within.

But, as is the case for all primates, a hungry lemur will eat anything edible that it finds (not a comforting thought for owners of various small pets!). In the wild, Ring tailed lemurs have been known to eat bugs and small animals under certain circumstances.

Lemurs are social animals and they live communally in groups, with females being the dominant gender (unlike most other primates). In other words, a solitary lemur wouldn’t thrive in your living room!

They are often observed engaged in social grooming, and this behavior serves to subdue aggression as well as enhance relationships. Among lemurs, aggressiveness is related to size.

Speaking of size, how big do lemurs get? The mouse lemur is the smallest species, averaging just a little over an ounce, while the indri lemur, at close to 20 pounds, is the alpha – so to speak.

Like dogs and cats, lemurs communicate via smell (scent markings), sight, and sound.

Lemurs are very vocal. The ring-tailed lemur and ruffed lemurs in particular are especially loquacious, using an impressive repertoire of calls and sounds to communicate amongst themselves.

Besides being the largest lemur species, the indri is also the loudest: his call can be heard from over a mile away! This is probably not something your neighbors would enjoy hearing at 2 a.m.

Longevity is a trait enjoyed by lemurs, with some species living over 30 years. This is much longer than the average house cat or dog! 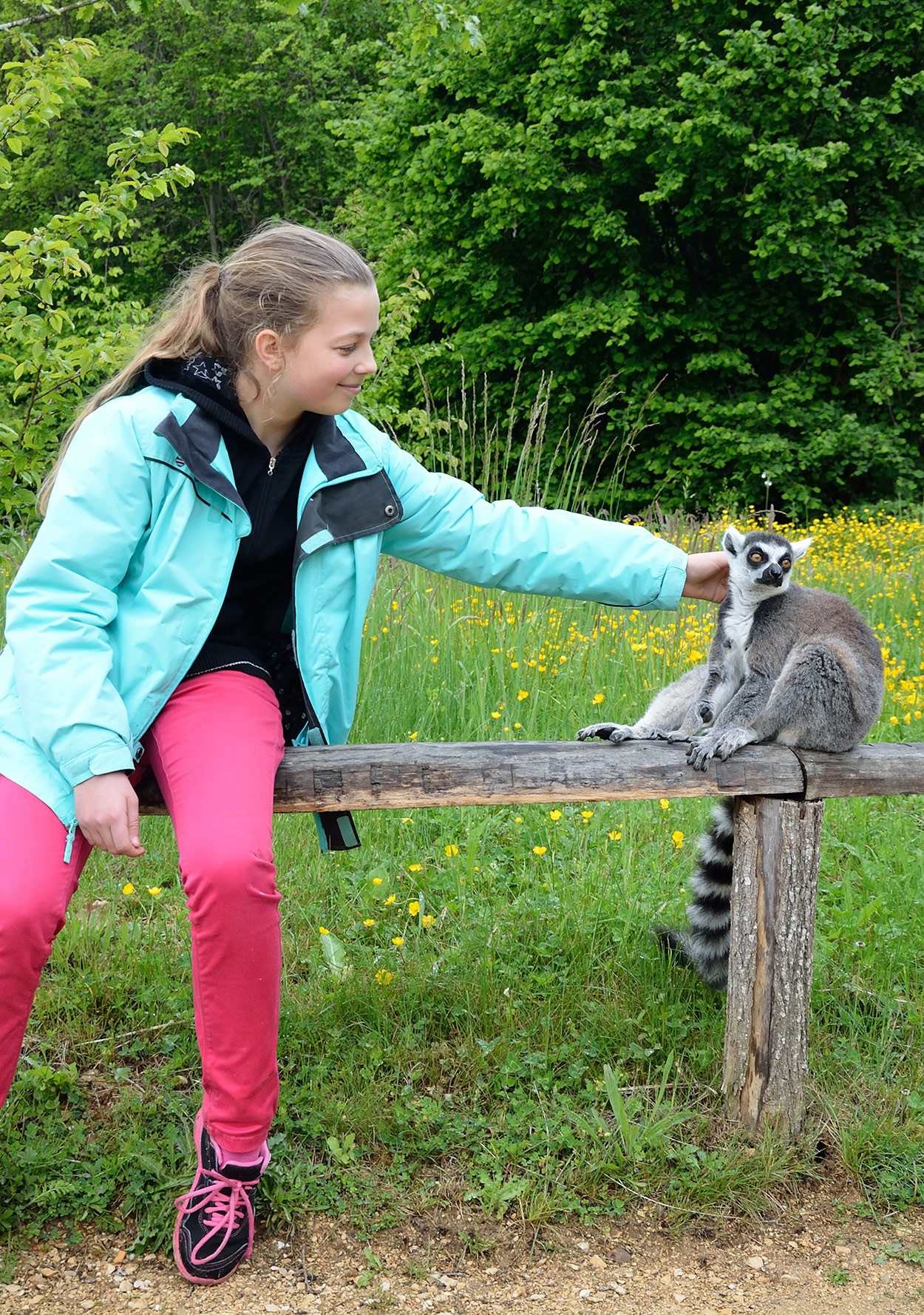 Lemurs belong in the wild

The Convention on the International Trade in Endangered Species of Wild Flora and Fauna (CITES) oversees the global exotic pet trade, while the USDA issues permits for some exotic species.

Keep in mind that when this trade is conducted outside of the law, it’s known as wildlife smuggling (involving billions of dollars each year). This is something you definitely don’t want to get caught up in.

There’s already a plethora of lemurs available for visiting in zoos and animal parks. So, “How much is a pet lemur?” is likely a question you’re better off not asking.

Likewise the answer to “Where do lemurs live?” shouldn’t be, “In my living room!”

Why? If you’re still not sure that lemur pet ownership is a proposition better left to the experts and Mother Nature, here are a few more considerations to ponder.

The various health issues regarding lemurs are not fully known, but it is clear that primates can transfer disease to humans and vice versa.

For example, a high risk of contagion from monkey B virus from rhesus macaques exists, and researchers have died from the virus after contracting it from research subjects.

On the other hand, primate pets can contract the herpes simplex virus from humans, which can be lethal.

In addition, every pet lemur is one less animal in the wild, possibly contributing to the extinction of these magnificent animals.

Exotic, wild animals are behaviorally the polar opposite of domestic pets. Wild animals act unpredictably, and can be resistant to training (yes, including potty training).

Then there are the liability issues. Did I mention that exotic mammals are the most likely to hurt or kill humans, with exotic primates at the top of the list?

You do not want to contemplate the liability issues that you’d be facing if your pet lemur were to injure (or worse) another person or pet.

Due to the reasons mentioned above, most animal welfare experts disagree with the idea of keeping a primate as a pet.

Lemur petting – can I do that?

I know what you may be thinking: what other exotic animals can I get if not a lemur?

Some of the other exotic animals that individuals seek out as pets include big cats, chinchilla, alligator, chimps, and fox, to name a just a few.

But really, it’s doubtful that you have adequate housing. Can you duplicate the environment for an exotic species, enough to keep them happy and healthy?

These animals are more accustomed to swinging from trees, lurking in muddy bogs, or chasing down hyenas in the wild than lapping water from a porcelain dish.

In addition, some of these animals have emotional and social needs that we can’t begin to fathom.

In other words, lemur petting is best left to other lemurs!

How can I help lemurs?

The good news is that even though cute, furry, entertaining lemurs are best left in the wild, there are helpful things that you can do to lend a hand to these endangered species.

Many zoos allow you to financially “adopt” an exotic animal, including lemurs. Or you can make a donation to a research organization or animal rescue fund.

If you’d like to do something a bit more hands-on, why not ask if your local zoo is accepting volunteers? Please note, though – many zoo volunteer programs do not allow their volunteers to actually handle animals.

Of course, one of the best ways to get up close and personal with these wonderful primates is through an ecotourism trip to Madagascar.

Whichever way you choose to support and help endangered lemurs do it from the comfort of your home – not with a lemur sitting next to you! 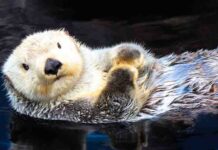 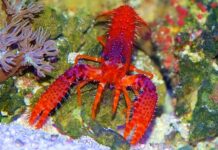 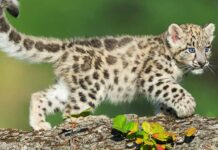