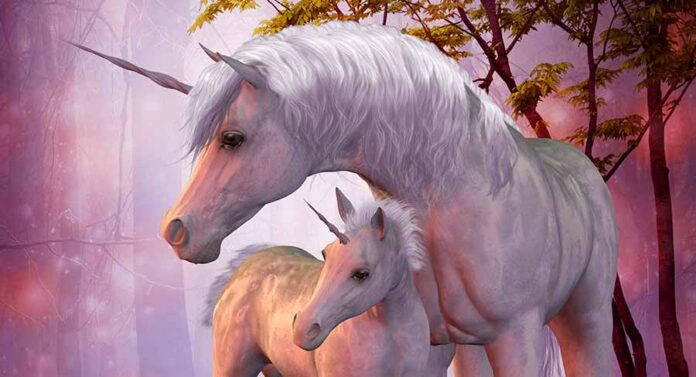 Thinking of bringing home a pet unicorn? Okay, probably not. But that doesn’t mean that you don’t have plenty of potential uses for unicorn names! From great horse or pony names, to names for your favorite toys, using a unicorn themed name is great fun. And boy do we have a majestic bunch for you to choose from!

We are going to share a magical list of rainbow sparkled names that will shine your shoes off. So get ready to plunge into a world of candied jellybeans and pick the unicorn name ideas of your dreams! But be warned, my 8 year old daughter helped to create this list, so the levels of fabulousness you’ll find here might be even too much for a unicorn to handle….

Coming up with a truly individual name, one that befits the rarest of creatures, is a challenging thing. One way to be more original is to pick a topic or theme you think fits your dream animal. Like the mystical or mysterious. Or how about double barrelling a couple of your favorite names together, to produce something that no one else will have thought of!

These beautiful, femine names are a perfect fit for a gorgeous unicorn. They are inspired by strong characters and include names that reflect the majesty of this amazing horse-like creature.

To make them even more regal, why not give your unicorn a title? Princess, Queen, Duchess, Countess. There are tonnes to choose from and they make your chosen name even more unusual. Here are some ideas of ways you can mix and match your favorite girly name with a glorious title!

Choosing a unicorn horse name that is beautiful and powerful is a must. Whether you are searching for a boy or a girl! Unicorns are regal beasts, full of poise and grace. These nobel names would make an excellent fit for any valiant young unicorn! Once again you can make them sound even more fancy by adding in a title.

Unicorns might be fictional (or are they…) but that doesn’t mean you can’t find plenty of examples of names for them in the world of the media! Television, books and comic creations are alive with unicorns (and alicorns!) right now. There is plenty of inspiration for fun and unique names to be found.

These unicorn character names include the wonderful My Little Pony unicorn names. Firm favorites in this house! In fact, we’ve got several guinea pigs named after them!

A great way to think up your own cute names is to choose a topic that embodies the adorable. Candies, mythical creatures and tiny things are all brilliant fits. Here are some sweet ideas to get you started:

You say unicorn, you think rainbow, right? These mystical beasts have really strong ties to the ethereal and what These beautiful names take you through all the colors of the rainbow! With that all important unicorn twist.

Unicorns are a mythical creature that light up the world with their power, hope and glory. So light and bright names give wonderful ideas and inspiration for them.

Magical names deserve a bit of pizzazz. And what says unicorn more than a name that twinkles more than a just shined diamond. These dazzling names will stand out, although probably not quite as much as a unicorn…

These badass unicorn names might be the most awesome way to name anything, ever… They have the super attitude of the unicorn with an unusual twist. Evil! Taking inspiration from the worlds of mythical heroes, horror movies and dark and twisted stories, these ideas would make even the brightest unicorn seem a little spooky.

And they sound even better as a name for an evil unicorn when you double barrell them or pair them with a particularly mean sounding word!

Of course, whilst these evil names might make your dream unicorn sound nasty, they could also sound pretty awesome…

What’s cooler than a unicorn? I certainly can’t think of anything more awesome than having one of my own! To think up a cool name of your own, why not pick your hottest topic and brainstorm words that you like on a big piece of paper. Then get your friends to help you pick the coolest one!

The best unicorn names are as magical, powerful and heartwarming as the mythical creatures themselves. Whether you are creating your own unique idea or choosing one from a list, you can’t really go wrong when rainbow sparkles are a part of your aim!