What do wild boars eat? Wild boars are omnivores meaning they can eat meat or vegetation. Their diet includes things like eggs, insects and grubs, plants, roots and shrubs. What wild boars eat varies depending on their habitat. Wild boars in the rainforest will have a different diet to those in Europe or North America. Some wild boars get their nutrition from carrion like larger animals that have died in other ways, including deer! Pet wild boars in captivity will have different food provided for them too. Today we’ll share what wild boars eat in the natural world and how to feed a healthy wild boar diet to them when kept as pets or on ranches.

In many ways, wild boar are nature’s ultimate omnivore. They have been observed consuming a vast range of foods, including some rather surprising items. But if you have wild boars living in your region, then their specific diet will be determined by exactly where you are.

Yehzu in this video is a very unusual, not-wild-anymore boar. She doesn’t need to worry about where her next meal is coming from. But how would her diet be different if she still lived in the wild? Let’s see!

What is a boar?

Wild boar are also known as wild swine and wild pigs. Their Latin name is Sus scrofa. There are over a dozen subspecies of wild boar, including Sus scrofa domesticus – the domestic pig which we rear for food. Wild boar are native to Europe, Asia, and northern Africa. But thanks to human introduction, they are now widespread on every continent except Antarctica. They are remarkable for how quickly they can reproduce and increase in population size.

Wild boar typically live for 4 to 5 years, although they’ve been recorded surviving twice that long in captivity. They can weigh anything from 145lbs to 500lbs, and males are obviously taller and more heavy set than females in most cases. Both sexes grow tusks in place of the canine teeth, but only the lower tusks of mature males are prominent. The tusks are used for self defense, and in the case of males, to fight rival love interests for access to females.

Wild boar are the forefathers of the domestic pigs we rear for food. In fact, domesticated pigs are a subspecies of the wild boar, and it’s still possible for them to interbreed, which sometimes happens when domestic pigs are kept near wild boar populations and the boundary of their enclosure isn’t secure. The reason pigs look so different from wild boar is due to selective breeding by humans for novel colors, differences in hair coverage, and a particular body type which yields a lot of meat.

What do Wild Boars Eat in the Wild?

Wild boar are opportunistic omnivores, which basically means they eat whatever they can find, whenever they can find it. This adaptability is a key reason why they have been successful in so many different habitats. Their main sources of food are

Feeding studies report that wild boar always consume at least one energy rich plant-based food. Examples include acorns, beechnuts, chestnuts, pine seeds, olives and cereal grains. Which one a boar relies most upon is usually decided by which is most readily available. Observers report that wild boar have a strong preference for plant based foods over animal matter. Animal based foods are eaten infrequently, but nonetheless it appears they are essential for wild boar to receive complete and balanced nutrition.

What Do Wild Boars Eat In Different Regions?

So, we’ve seen how wild boar adapt to survive on a wide range of foods. In fact, there’s very little that they can’t eat! That means the specific details of their diet tends to depend upon what’s available. Let’s see how that looks in some of the different places wild boar live in large numbers.

Despite not being native to the United States, it’s estimated that between 3 million and 8 million wild hogs currently call it home, mostly in California, Texas, and the southeastern states. These boar still mostly eat plants, but a common feature of wild boar in non-native habitats is that they are more likely to hunt and eat smaller animals and root for fungus. This has causes significant ecological problems, such as

They can even damage the human economy by destroying crops and spreading diseases to livestock.

What do Wild Boars eat in Europe?

Despite being part of their native range, the wild boar’s eating habits are scarcely less destructive in Europe these days. This is largely because when humans use land for farming, it also creates an attractive, energy-rich, and easily consumed source of food for boars. So much so that commercial crops of maize, wheat, barley and alfalfa have become one of the main food sources for European wild boars, even when other suitable food is nearby. Unfortunately, since boars trample over and destroy large areas of crops as well as eating others, they have become an unwelcome source of damage. Some farmers have even gained approval for culling programmes to avoid being driven out of business.

Where wild boars live near built up areas, they often supplement their diet by rummaging in trash cans. Where there are lots of boar feeding this way, they can become a serious nuisance. Some towns and cities even have a real problem with mother boars attacking human residents they perceive as a threat to their babies. In Rome in Italy, city officials have even resorted to evening curfews, to avoid people being seriously hurt in the night and not found until the morning.

What do Wild Boars Eat in the Rainforest?

Rainforest are an all-natural banquet for wild boar, which can adapt to eating just about anything they find there. In particular, wild boars living in rainforests browse, graze and forage on plant matter. They especially favor energy-dense foods, including tree seeds.

In the rainforests of southeastern China, boar are a native species, and they are hunted by larger predators such as tigers. In these habitats, wild boar fit quite neatly into the ecosystem and the food chain. However in the rainforests of South America, wild boars are a non-native, invasive species introduced by humans in the 20th century. Since they have no natural predators there, wild boar numbers have become a growing problem to the landscape and the local biodiversity.

Wild boar sows give birth to litters of up to 12 babies at a time, which camouflaged with light colored stripes running down their back. They stay in the nest and rely on their mom’s milk to meet all their energy and hydration needs for roughly the 10 days. After that the siblings and their mom start moving around together, possibly in the company of some other sows and their litters, and the youngsters start grazing for themselves as well as suckling from mom. Weaning is a gradual process which completes when the piglets are between 3 and 4 months old.

What do Wild Boars Like to Eat the Most?

Wherever they live, wild boars show a strong preference for plant matter over animal matter. But exactly which fruit, seed, leaves or roots they rely on depends upon what plants species are growing where they live, and the time of year. Their preference is driven mostly by which foods are most available, easily accessible, digestible, and energy-rich. Which is why crops being cultivated by humans are such an appealing meal when available.

But, it has to be said, that this species is altogether unfussy when it comes to what they’ll have a go at eating. They are so unfussy in fact that they’ve even been documented eating indigestible items such as rocks, mud, manure and plastic.

What Meat Do Wild Boars Eat?

Animal food sources are an important part of a complete and nutritious diet for a wild boar, but they are not a large part of their diet. They are not physically well adapted for hunting, and the animal matter they do consume tends to be of the easily-obtained sort, for example:

Despite this, wild boar are sometimes mistaken for being aggressive predators. This may be because mother sows react so aggressively to encounters with people, in order to defend their offspring. This aggression is mistaken for predatory prowess as well, which is not the case.

What is a Boar Eaten by?

Wild boar in their native habitat are mostly hunted by wolves in Europe and tigers in Asia. Owing to their size, they tend to be the preserve of the largest predators only. But smaller predators which might attempt to take on a young, small, or injured wild boar include:

In places where wild boar are a non-native species, including North and South America, the absence of many predators big enough to kill an adult wild boar is a contributing factor to boar populations expanding out of control and causing ecological and agricultural damage.

Can you Eat Wild Boar?

Yes. Wild boar are particularly abundant in Texas, Florida, California, North Carolina and Tennessee. Hunting them for meat is a popular sport, particularly at the beginning and end of the season, which is longer than the hunting season for deer. There are plenty of recipes online for turning a wild boar into dinner, but be sure to check the permit requirements in your area before you go hunting!

Wild boars truly are nature’s own trash cans. There is very little that they won’t eat, but they prefer a diet of energy-rich plant matter. If you spot them eating something unusual it’s best to leave them to it. Never risk approaching a sow who may have babies nearby. 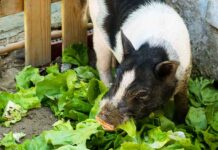 What Do Pigs Eat? Wild and Pet Pig Diets 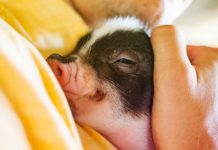 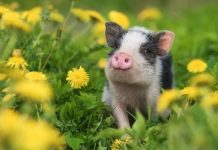