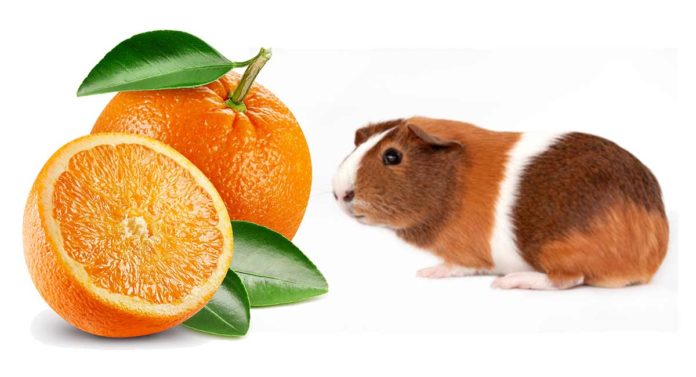 Yes. Small quantities of orange are a safe and delicious treat for guinea pigs to eat.

Oranges are a source of fiber and vitamin C, both of which are vital components of a healthy guinea pig diet.

However it’s important to recognise the signs that a guinea pig is consuming too much orange as well.

Pet guinea pigs all belong to the species Cavia porcellus.

This species was founded in captivity and doesn’t exist in the wild.

But close wild ancestors including the Brazilian guinea pig, the montane guinea pig, and the shiny guinea pig still live all over South America.

Wild guinea pigs survive by grazing on grasses and other foliage.

They’re only likely to consume fruits which they find at ground level on their foraging missions.

But oranges are another hybrid, also created by humans by crossing pomelos and mandarins.

That means that oranges are only usually found in places where they are being cultivated by people.

And of course, oranges also grow in trees up to 10 meters tall, and guinea pigs can’t climb.

So it’s fairly unlikely that many wild guinea pigs will happen across an orange in their lifetime.

But does that mean their domestic brethren should keep away too?

Guinea pigs are herbivores, which means they need an entirely plant-based diet.

Biologically and anatomically, they are highly adapted for a lifetime of eating grass and hay.

Grass and hay are notoriously difficult to extract nutritional value from, so their stomachs are designed to digest their meals twice. They achieve that by re-eating their poops the first time around.

The fibers in grass are also hard wearing on teeth, so guinea pigs’ teeth grow continuously throughout their life.

In captivity, it’s important to make sure guinea pigs still eat a lot of roughage and high-fiber foods.

Otherwise they can develop intestinal upset, and their teeth can grow painfully long.

The Importance of Vitamin C For Guinea Pigs

Like humans, bats and birds, guinea pigs have lost the ability to make vitamin C.

They still need it, so they need to receive it in their diet.

In our homes and yards, pet guinea pigs can receive supplemental vitamin C from leafy greens, fruit and veg, fortified pellets or drops in their water bottle.

But what about from a ripe and tasty orange?

Yes, oranges are a safe foodstuff for guinea pigs.

They aren’t toxic, and they won’t harm your cavy pet.

But can they go another step further and even be good for guinea pigs?

Are Oranges Good for Guinea Pigs?

Oranges are certainly a respectable source of some of guinea pigs’ nutritional requirements.

A typical orange contains 2.5 grams of fiber and just over 50 milligrams of vitamin C per 100g grams of fruit.

This is good news for guinea pigs!

Oranges are a great supplement to include alongside their daily hay and pellet food.

But it’s important to think of them as a treat food rather than a dietary staple.

Let’s find out why.

Are Oranges Bad for Guinea Pigs?

Oranges have nutritional upsides for guinea pigs, but they also have one big downside.

And that’s the amount of sugar they contain.

Since guinea pigs’ digestive systems rely on constantly processing large volumes of roughage, they are programmed to eat continually and keep their stomachs full.

But if the food they’re packing into their bellies is also high in sugar, it puts them at risk of health problems including tooth decay, obesity, diabetes and cataracts.

So guinea pigs can enjoy a juicy orange snack, but it’s wise to restrict their access so they aren’t tempted to fill up on too much of it.

With oranges, as with so many good things in life, moderation is key.

Your guinea pigs diet should be predominantly hay.

You can supplement it with fresh leafy greens, safe fruit and veg, and hay-based commercial guinea pig pellets if you like.

Offer orange as small, peeled wedges, not more than once a week, and remove anything that’s left after an hour, before it spoils or attracts flies.

If your guinea pigs show signs of diarrhea or soreness around their mouth or bottom, stop offering orange and switch to something less acidic.

If your guinea pig gains weight, consider restricting them to low-sugar produce until they’re a healthy size again.

Can Guinea Pigs Have Orange Juice?

Did you know that 85% of oranges are destined to be turned into orange juice?

We can’t get enough of this sunny beverage with our breakfast!

So straight away, OJ is missing some of the nutritional benefit for guinea pigs.

It’s best to stick to clean, fresh water for your piggies’ drinks, and serve up their orange in tasty wedges.

As a rule, guinea pigs enjoy fruit, and oranges are no exception.

My own three guinea pigs are always happy to receive a couple of orange wedges with their leafy greens.

And I often spot oranges among the foodstuffs in guinea pig enclosures at farm parks and animal sanctuaries.

Of course individuals have different tastes and preferences just like we humans do.

So if you try offering your guinea pig a little orange, and it gets roundly rejected, nevermind.

Slices or wedges of orange are a well-received and safe to eat treat for guinea pigs.

But they are also high in sugar, so it’s important to make sure they don’t fill up on them in large quantities.

Oranges aren’t the only produce packed with fiber and vitamin C which as safe for your guinea pig to eat.

You can also try offering them:

Does Your Guinea Pigs Love Orange?

Do your guinea pigs enjoy tucking into a wedge of juicy orange?

Or is there another treat they prefer?

Witowska et al, The Effects of Diet on Anatomy, Physiology and Health in the Guinea Pig, Journal of Animal Health and Behavioral Science, 2017.