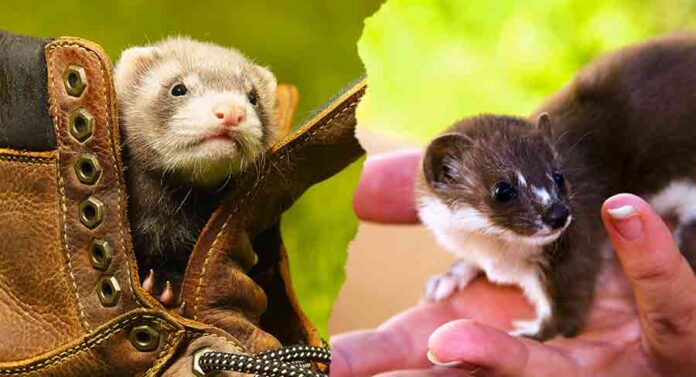 The difference between a weasel vs ferret are easy to spot once you know what you’re looking for.

Ferrets are much larger than weasels. Ferrets are also a domesticated species, whereas weasels are wild animals.

But they have some fun things in common too. And they both deserve to be better known and understood.

Weasel Vs Ferret – Do You Know The Difference?

Weasels and ferrets are both small carnivorous mammals with long bodies.

If you’re not used to seeing them, you might not know right away which is which.

In this article we’ll help you learn to tell the difference like a pro.

If you like, you can use these links to navigate to different sections of this article:

Let’s start with where weasels and ferrets came from, and how their stories diverged down completely different paths.

Weasel vs Ferret – History and Origins

Weasels and ferrets both belong to the Mustelid family of species, which also includes badgers, otters, polecats, stoats and mink.

There are 17 species of weasel, and they are all wild animals. They are found across most of North America, Europe, and Asia, plus Greenland, and the northern half of South America.

Ferrets, meanwhile, are a domesticated subspecies of the European polecat, which is native to Europe and North Africa.

People have kept domestic ferrets for at least 2,500 years.

In that time, the most common purpose for keeping them was to help with hunting. Since they are small, long, and keen explorers, they’re perfect for flushing underground game like rabbits up to the surface.

Some countries have also tried using ferrets to control the number of other invasive species. But this frequently resulted in the ferrets themselves becoming too numerous, or preying on an unintended native species.

Ferrets only really gained popularity as pets from the late 20th century onwards.

As of 2012, the American Veterinary Medical Association estimates that there are just over half a million ferrets kept as pets in the United States.

NOTE: The black-footed ferret in America is named for its similar appearance to the domestic ferret. It is, in fact, a completely separate wild species.

Weasel Vs Ferret Appearance – How To Tell Them Apart

Ferrets are much bigger than weasels.

Ferrets are typically about 20 inches long from their nose to the tips of their tail, and weigh 1.5 – 4.5 lbs.

Since domesticating them, ferret enthusiasts have used selective breeding to refine a wide variety of coat colors and markings.

Ferret colors range from the traditional brown sable markings of their wild ancestors, to white, silver and cinnamon.

Weasels’ colors depend upon their species. The best known species is the least weasel, which has a red-brown coat and a white belly.

The striking yellow-bellied weasel in India has a black coat and a vivid mustard-yellow belly!

Even though, as species, they’re quite closely related, being a domestic species has unsurprisingly made a big difference to the temperament of ferrets, when compared to weasels.

Weasels are famous for being fierce, tireless hunters. They have an extremely fast metabolism and need a lot of food every day to sustain them.

Weasels kept in captivity for any reason are very active, and need several hours of enrichment and engagement every day to burn off the energy they would otherwise use hunting.

Since weasels (even weasels born in captivity) are wild animals, they are often reluctant to be handled.

Ferrets are fun and friendly pets.

Provided they have been raised around people, and they are handled gently, they tend to enjoy cuddles and being picked up and stroked.

They are also curious little explorers and very playful with people, toys and other ferrets.

Some people think they represent the perfect balance between being people-focussed and affectionate like a dog, and independent like a cat.

One fascinating behavior ferrets and weasels have in common is “war dancing”.

War dancing in a playful display of wild jumping about, running around, and bouncing off things. In the wild, weasels also perform war dances when they corner prey.

Weasels Vs Ferrets As Pets

Weasels are not a domestic species, so if it’s a pet you’re looking for, the ferret is the way to go.

Bear in mind that some regions have strict restrictions on keeping pet ferrets, due to the ecological risk of ferrets escaping, and the possibility of them transmitting rabies.

They are completely illegal in California, Hawaii, Washington DC and New York City.

Other regions only permit ferret ownership with a licence, or allow unrestricted ownership, but have strict rules about breeding.

If you’re not sure what the regulations are in your area, ask a local vet.

We have an archive of articles to help you prepare for and care for a pet ferret right here.

Weasel vs Ferret – Which Is Your Favorite?

When it comes to ferrets vs weasels, which species do you prefer?

Have you ever kept a pet ferret, or met a weasel being raised in captivity? 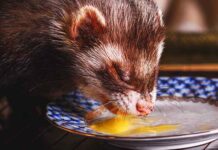