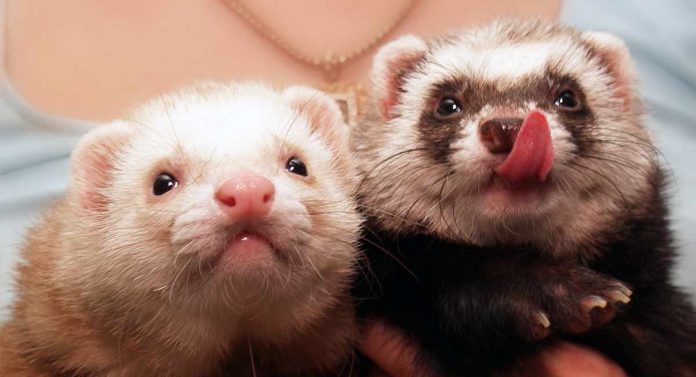 Just as with pet dogs and cats, ferret neutering will prevent unwanted pregnancies. But for neutering your pet ferret, there are a couple of additional issues at play.

Ferrets are well known for their “distinctive” smell – to put it nicely. While some of this smell is due to the ferret’s skin oils, the smell is also affected by their hormonal levels and reproductive cycles.

Thankfully, some methods of ferret neutering will stop this smell in both male ferrets (hobs) and females (jills).

However, not all methods of neutering will stop your ferret being a bit whiffy, so it is important to choose the right method if you can’t handle the scent.

Female ferrets are also at risk of developing life-threatening anemia if they are left intact and able to go into heat.

This makes ferret castration (yes, it’s called that for female ferrets, too!) a more serious issue for owners of a jill.

A Bit About the Female Ferret’s Reproductive System

To understand why castrating ferrets, in particular jills, is important, we need to understand a little bit about their reproductive cycle.

Ferrets reach sexual maturity at around four to eight months of age.

A jill will come into season when the hours of daylight becoming longer. In the northern hemisphere this happens from March to September (from spring through the end of summer).

She will stay in heat until she mates with a male, or until the days become shorter again.

For this reason, action must be taken to bring the jill out of season.

The Importance of Ferret Neutering for Female Ferrets

A problem arises if the jill is left on heat for an extended period. While the jill is in heat, her estrogen levels are raised.

This results in decreased production of red blood cells, and in turn she becomes at risk of developing life-threatening anaemia. There is also an increased risk of her developing serious infections.

Aside from waiting for the days to lengthen, or mating with a male (neutered or intact), there are other ways she can be brought out of estrus.

This implant is the method favored by some veterinarians. We will talk in more detail about these options later in the article.

Male ferrets do not face the same risks as their female counterparts if they are not neutered.

However, male ferrets who have not been neutered will emit a strong, musky odor while they are in heat.

They will also mark their territory with urine while they are on heat, somewhat like a tomcat.

Clearly, these are undesirable behaviors, unless you plan to breed ferrets.

There are a variety of ferret neutering options that you can discuss with your vet.

Spaying involves the removal of the reproductive tract in either the male or female ferret.

While this will prevent pregnancies and the ferrety smell, it can lead to another health issue known as hyperadrenocorticism, an adrenal disease common in ferrets.

It appears that the younger ferrets are when desexed, the higher their chances are of developing the condition.

This option is only for males and involves the removal of a section of the spermatic cord.

This option will not reduce the behaviors and smells associated with the male being in season.

Also, in some very rare cases, the procedure can reverse itself.

An injection of progesterone is only an option for jills. Called the jill jab, this injection will stop estrus within around 10 days, and is given at the onset of the first cycle a jill experiences.

Most jills will only need one injection per cycle. However, some will require a second jab.

Suprelorin implants are placed under the skin by a veterinarian while the ferret is sedated.

These implants will stop the female from having a cycle and will also prevent the male from being able to impregnate the female.

However, these implants are only licensed for use in females.

The implants should last around 18 months to 2 years. On average, this covers about two breeding cycles.

These injections are considered a safe alternative to ferret neutering.

Not only do they prevent pregnancy, anemia and smell, they do not present the potential health concerns that spaying can cause.

How Much Does It Cost to Desex a Ferret?

As we have seen, there are a few options available when it comes to neutering your ferret.

As such, the ferret desexing cost is going to vary according to the option you choose, and where you live. The best option is to contact your veterinarian to inquire.

Generally speaking, a jill jab is the cheapest option up front, but you will have to pay for it every time she comes into season again. In the end, it may well cost just the same as other options.

Despite the ferret neutering cost, it is a worthy investment.

Not only will this monetary outlay ensure there are no unwanted pregnancies, but it could also be a lifesaver for your female ferret.

A dedicated ferret fan base out there definitely enjoys life with these fun-loving creatures, and you can be part of it.

But if you are new to the world of ferrets, answers to questions about their care can be a little hard to come across.

It’s vital for ferret owners to have certain information, such as the importance of desexing your ferret – especially if it is female.

We hope you have found this article helpful, and you feel prepared to make the best decision for the health and well-being of your pet ferret!

If you have any additional questions or comments, please let us know in the comments section below.

Schoemaker, N. J. et al (2000). Correlation between age at neutering and age at onset of hyperadrenocorticism in ferrets. Journal of the American Veterinary Medical Association, 216.