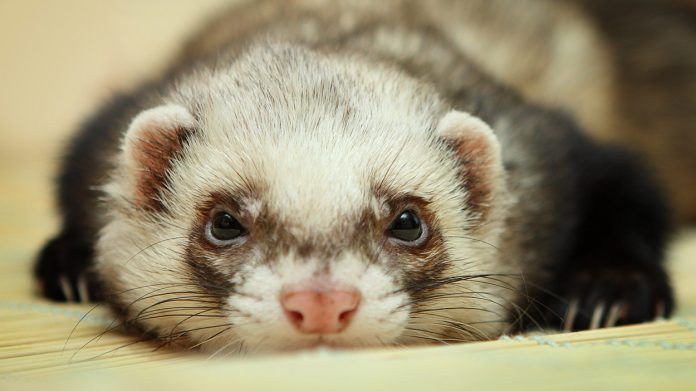 Welcome to our complete guide to adrenal disease in ferrets.

A new diagnosis for our pets is always scary. Often times, pet owners are plagued with questions regarding their pet’s disease.

What is the prognosis? Can it be treated, and how? What are the causes?

With something like adrenal disease, which is usually unknown by the general public, these questions can be even more pressing.

Luckily, those are exactly the types of questions we’ll seek to answer in this article.

We’ll look at what exactly adrenal disease is, possible treatments your vet might recommend, the theorized causes, and much more.

By the end of this article, you’ll know everything you could ever possible need to know about adrenal disease in ferrets.

What is Adrenal Disease in Ferrets?

Adrenal disease is, simply put, the growth of tumors on a ferret’s adrenal glands. Most of these tumors are not dangerous in themselves, but their placement on the gland makes them troublesome.

A ferret’s adrenal glands produces a number of hormones, particularly sex hormones. When a tumor or lesion develops on one of the glands, it can cause overproduction of these hormones. This can cause serious issues if left untreated.

In humans and other animals, this disease is called Cushing’s disease. However, because of the different hormones produced by a ferret’s adrenal glands, this disease usually does not look very similar to the disease found in other species.

Because of this, it is known by a different name and has very different symptoms.

One of the main signs of adrenal disease in ferrets is hair loss. Nearly every ferret affected with this disease will lose their hair, particularly near their tail and rear legs.

Itchiness is also a common symptom. This is especially true when it is coupled with hair loss, as the two symptoms typically go hand-in-hand.

However, it is possible for a ferret to exhibit the symptom of itchiness without hair loss, though this is rarer.

Male ferrets might also have difficulty urinating due to cysts on the prostate. Cysts on small amounts of prostatic tissue occurs occasionally in males with adrenal disease.

This will eventually lead to a complete inability to urinate, if left untreated.

However, inability to urinate is also caused by a number of different disorders. Just because a ferret can’t urinate does not mean they have adrenal disease.

Males might also exhibit a return in sexual behavior, even if they have been neutered.

Lethargy also occasionally occurs. And muscle atrophy often goes hand-in-hand with this. This can cause a pot-bellied appearance similar to that seen in other animals.

The cause of ferret adrenal disease is unknown.

It seems to appear more in females than males, though it is unclear why. Clinical signs also most often appear between the ages of three and four.

It seems to appear more often in the U.S. than other countries as well. This means that environment and/or genetics might play a big role.

It is thought that regular neutering might play a part. When a ferret is neutered and not bred, the natural up-and-down pattern of sex hormones becomes disrupted. This is theorized as a possibility for causing adrenal disease.

However, these theories are just that – theories. There aren’t yet any studies exploring this possibility.

If an unspayed ferret is not bred, it can cause an unusually high spike in estrogen which can cause anemia and death. This is why the spaying of ferrets is so widespread.

When a ferret is brought to a vet showing signs of adrenal disease, there are a number of ways your vet might confirm diagnosis.

Firstly, your veterinarian might expect adrenal disease to be more likely in neutered ferrets who are around three years of age. This is because this disorder occurs most commonly in these ferrets.

If a ferret is also showing symptoms most associated with adrenal disease, such as hair loss, your vet may decide that exploratory surgery is indicated.

This simply involves performing a minor surgery to see if the ferret does in fact have a tumor on the adrenal gland. This is one of the most common and straightforward ways to diagnosis.

A physical exam will also probably be done, since large tumors can be felt by simply pressing on the stomach. However, tumors are rarely this large and further diagnostic measures are often needed for confirmation.

You vet might also opt to perform an adrenal panel. This will involve drawing blood and looking at the amounts of various hormones in the blood sample.

Since adrenal disease causes an abnormally high about of sex hormones, this is very effective.

Most commonly, multiple steps will be taken to confirm diagnosis. 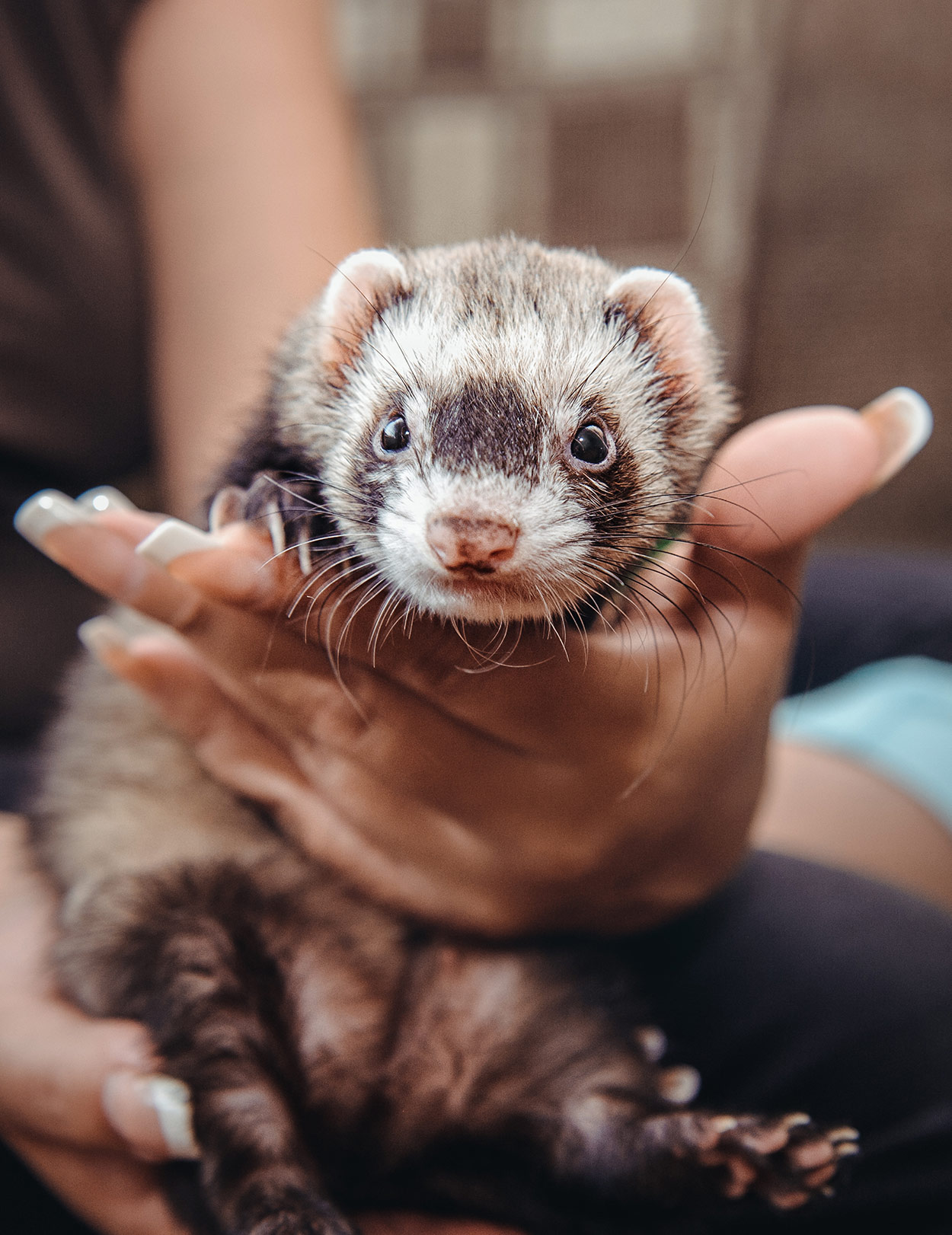 The most common and straightforward treatment of adrenal disease in ferrets is through surgery.

Simply put, the tumor and sometimes the whole gland is removed. After a successful surgery, hair often starts growing back in as little as a week.

However, this type of surgery, like all surgeries, does have its drawbacks.

If the gland or both glands are removed, the ferret might not be able to produce enough hormones. This can be treated with hormonal supplements, but can be very serious if left untreated.

Other treatments have recently become available and might be suggested by your vet.

Ferret adrenal disease treatment cost will vary based upon what you and your vet decide is the best course of treatment for your ferret.

Note that ferrets are often considered exotic pets, and treatment for exotic pets may be sometimes be higher than for dogs and cats.

If your ferret needs surgery, however, you can expect to pay at least several hundred dollars.

One of these alternative treatments is the melatonin implant. This option works by regulating the hormones in a ferret.

However, it is in its beginning stages and does have a couple of side effects, such as lethargy.

Another alternative treatment is the use of the deslorelin implant. This treatment is most suited for ferrets who are unlikely to survive surgery or benefit from other treatments.

This treatment does not cure the disease, but instead lessens the effects of the symptoms.

So how long can a ferret live with adrenal disease?

If treatment is successful, there is no reason that the ferret shouldn’t be able to live as long as any other ferret.

There are usually no lasting health problems following a successful treatment, and many ferrets go on to live long, happy lives.

Recurrence is possible and does occur in some ferrets, but re-treatment is often not an issue, as long as some of the gland is still intact.

Plus, with recent non-surgical treatments being investigated, it is entirely possible for a relapsing ferret to be treated in an alternative manner.

Adrenal Disease in Ferrets – A summary

Adrenal disease in ferrets is generally common. It is caused by a tumor that grows on one of the adrenal glands and increases hormonal production.

Luckily, there are many possible treatments, all of which are generally effective. After a successful treatment, many ferrets do not have long-lasting health problems.

Truly, this disease is not a life sentence for your ferret and is very treatable.

However, early diagnosis is important, so always take your ferret to the vet if he starts showing symptoms of adrenal disease.