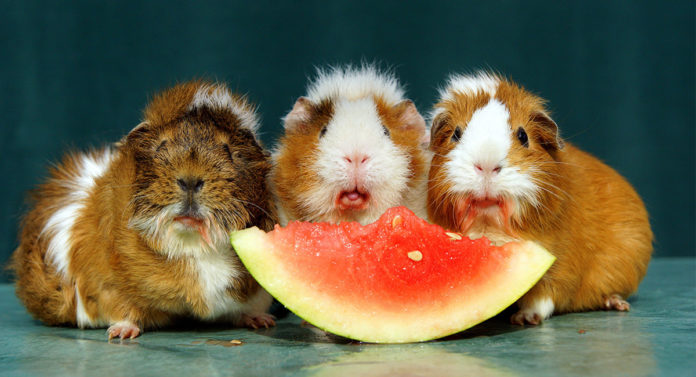 Does Your Guinea Pig Love Their Fruit And Veg? Then I Bet Your Wondering Whether You Can Branch Out Into More Exotic Items! Can Guinea Pigs Eat Watermelon Safely? Let’s Find Out!

Any good pet owner will want to make sure they avoid feeding their pets anything that could make them ill.

So it’s always a good idea to double check before you add a new food to your pet’s diet.

Guinea pigs love some fruits, like apples, but does that mean all fruit is safe?

Can guinea pigs eat watermelon too?

Watermelons are tasty fruits, which many of us enjoy as a snack!

The plants they come from belong to the same family as the squash, zuchinni and cucumber.

They come from trailling plants and grow at ground level.

But can these delicious, sweet fruits provide a healthy change in your guinea pig’s diet?

Some foods that are perfectly healthy for humans can cause problems for guinea pigs. 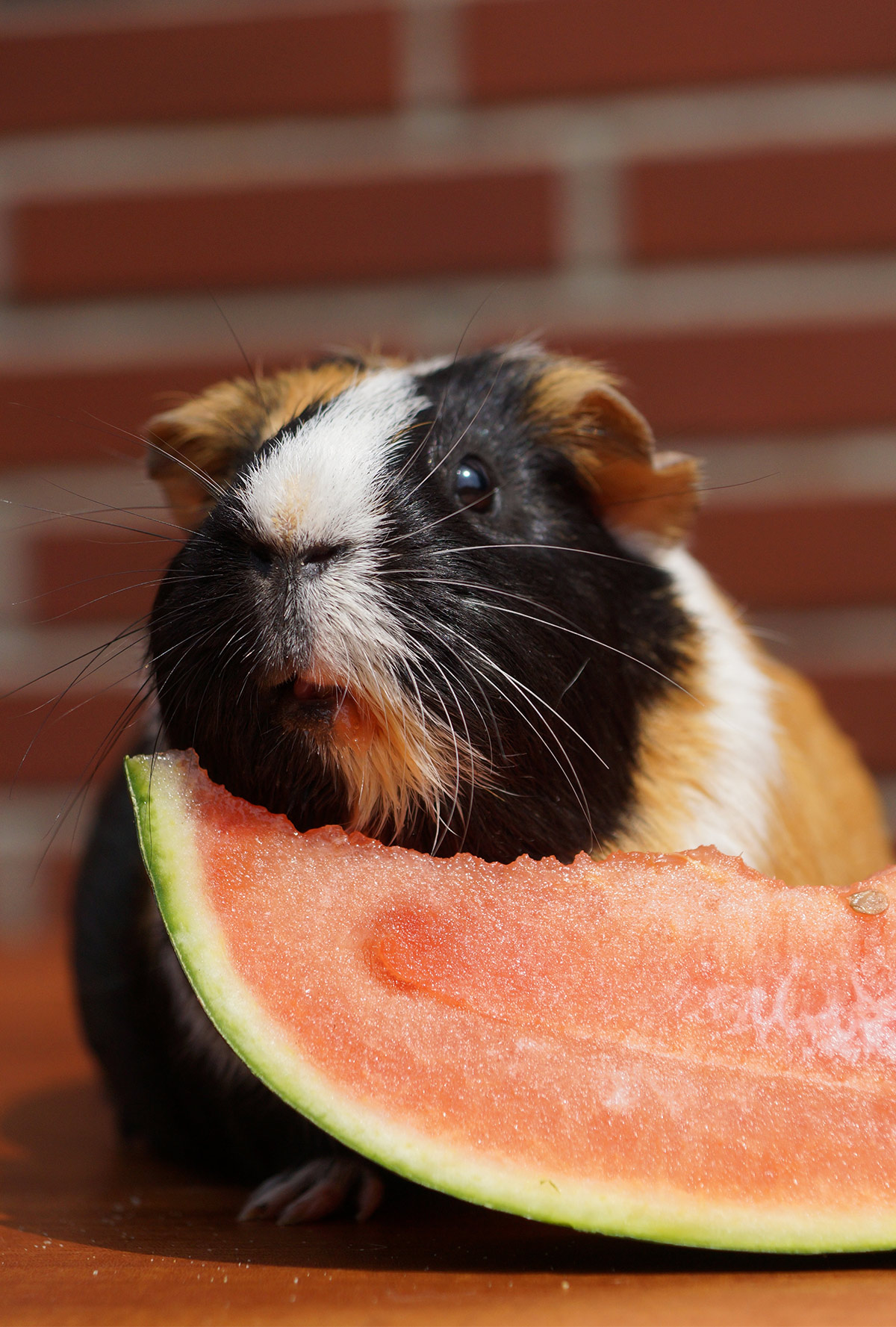 For example, whilst both Kale and Spinach contain a lot of nutrients, they are also rich in calcium and this could contribute to bladder stones in guinea pigs.

But what about fruit?

Guinea pigs are delicate creatures with sensitive bellies, so you need to be careful about what you feed them.

Guinea pigs can eat watermelon, but only in moderation.

Your guinea pig should only have a small slice of watermelon once a week.

This is because most fruits contain a surprisingly high amount of sugar. Too much sugar is just as bad for your pet as it is for you.

Guinea pigs can eat fruit, but only as an occasional treat.

Hay or grass is essential for a healthy digestive tract and the maintenance of your guinea pig’s teeth.

Your guinea pig should also be fed a daily portion of fresh leafy green vegetables, like green leaf lettuce or broccoli.

Is watermelon good for guinea pigs ?

Researching watermelons and guinea pigs is important before you feed your pet any. Guinea pigs, like humans, do not produce vitamin C naturally.

Vitamin C is very important for a guinea pig’s diet.

A high intake is recommended to protect their teeth and immune system.

Larger doses may be required for specific health concerns, and as your Guinea Pig will not create the Vitamin C by himself, you will have to incorporate it into his diet.

Whilst watermelons are not the strongest source of Vitamin C, they have been shown to contain enough to have a positive effect on a Guinea Pigs health. 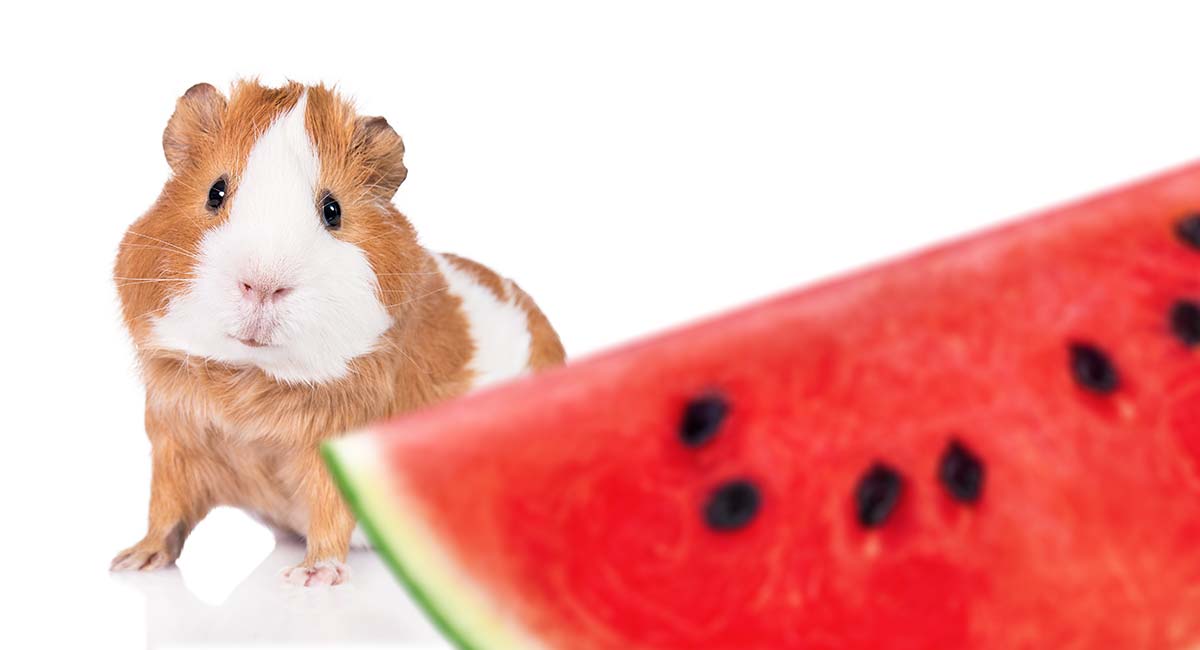 Watermelons are a natural and mild tasting fruit so they won’t shock your guinea pigs taste buds.

Watermelons, as the name suggests, contain a lot of water and so they are good for keeping your guinea pig hydrated during hot summer days.

Problems With Watermelon and Guinea Pigs

Although watermelon is high in vitamins, it’s also high in sugar and water.

There is such a thing as too much water, so avoid giving them too much watermelon and obviously never use it as a substitute for fresh water.

Guinea Pigs do not naturally eat fruit, so whilst a small amount is okay too much could be detrimental to their health.

It may not seem like it, but watermelons are quite high in sugar.

Guinea pigs are more sensitive to sugar then humans are and portions which would seem tiny for us can cause stomach pains and diarrhoea in guinea pigs.

It is always a good idea to buy organic watermelons which have not been treated with chemicals or pesticides because these substances can harm your guinea pig.

BIf that is not possible to buy organic produce you should thoroughly wash the watermelon to remove any chemical residue before feeding it to your pet.

Rotten fruits could be detrimental for your pet’s digestive health and they just don’t taste very nice!

Whenever you introduce a new food into your guinea pigs diet you will have to keep an eye on your pet’s droppings to make sure there are no adverse effects on your pet’s digestion. Introduce new foods gradually and stop if you see any negative changes.

Although guinea pigs can eat watermelon not all guinea pigs will like watermelon. Some may like the flesch of the fruit, but hate the rind, and vice versa.

If your guinea pig doesn’t want to eat their watermelon don’t fret and try a few other fruits instead.

There are several fruits and vegetables that are high in vitamin C and are also suitable for guinea pigs .

But if your guinea pig does, you’ll need to know how to prepare it!

Some people don’t think you should feed your guinea pig watermelon rind because they say guinea pigs cannot digest this part of the fruit, but there doesn’t seem to be much evidence to back that up.

Many guinea pigs seem to be fine with the rind as long as it is cut into small strips and they are not given too much.

If you have any concerns about the watermelon rind you may want to consult your vet.

In theory, the fleshy part of the watermelon has much more sugar in it and the rind has most of the nutrients.

So the rind should actually be better for your guinea pig then the main part of the fruit.

Some studies have shown that guinea pigs actually prefer the green rind part of the watermelon, too!

So, although guinea pigs can eat watermelon rind, you still need to prepare it properly. Ensure the rind is thoroughly washed to remove any chemicals, and cut the rind into small strips.

Remember that you still have to be careful not to give your guinea pig too much rind as moderation is still very important.

So can guinea pigs eat watermelon rind? Yes! But remember every piggy is different! Watermelon rind is not the tastiest food in the world and so your guinea pig may not want to eat it. Some guinea pigs love the rind, but others do not.

Now, we’ve learnt about the main fruit flesh and the rind, but can guinea pigs eat watermelon seeds?

The answer to “can guinea pigs eat watermelon seeds” is a little bit complicated.

Watermelon seeds may not be toxic for guinea pigs, but they should be avoided because they are a choking hazard.

Remember to take the seeds out of the watermelon portion before feeding it to your guinea pig.

Can guinea pigs have watermelon regularly?

Guinea pigs can eat watermelon, but it should not be a major part of their diet.

You can feed your guinea pig small portions once a week. You can feed them the flesch, or the rind, but make sure to remove all seeds.

A watermelon wedge measuring at around 2 inches should be fine, but don’t give them more than that.

You could also feed your guinea pig a few strips of rind with a bit of the red watermelon flesh attached.

Always wash the watermelon to ensure you are not feeding your pet any pesticides.

Remember that your guinea pig may not like the taste of watermelon and may not want to eat it. If that’s the case why not try another fruit like apples, bananas, grapes, kiwis, melons, or strawberries.

Remember to remove the seeds, wash the fruit and check that it’s fresh before offering it to him.

What are your experiences with watermelons and guinea pigs?