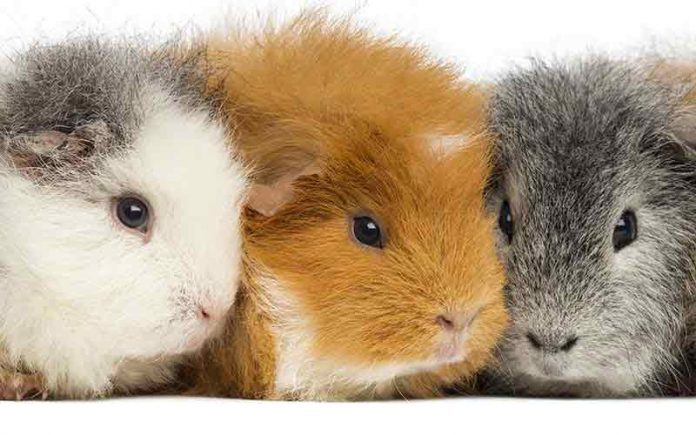 Cute, cuddly and colorful guinea pigs are the favorites of the small animal world. There are numerous breeds and each has its own distinct variations and traits. From the show cavies, to the wild piggies, to the animals in your local pet store. You are likely to see a rainbow of colors and patterns. And let’s not forget the adorable offerings at your local animal shelter.

If you have been considering adopting your own guinea pig, then you may wonder just why the animals seem to present such a variety of coloration and also what the different pattern names are. Well we investigate just this tonal conundrum in this article!

The Genetics Of Guinea Pig Colors

Before we delve into the many guinea pig color variations you may see when venturing into your local pet store, we need to understand a bit about genetics and how color variations are created. While you may gloss over the term genetics as boring or too scientific for your taste, understanding inheritance can help you to figure out your furry pal just a little bit better.

Color variations in guinea pigs can be understood by looking at genetics. Basically, the genes of the mother and father determine the coloring of the offspring.

The Guinea Pig Colors We See

A phenotype is a very scientific name that refers to the appearance of the guinea pig. While genes are supplied by each parent, certain traits are more likely to be passed on from one guinea pig to the next. These traits are called ‘dominant’.

Dominant traits can influence everything from guinea pig eye color, to hair length, to pigmentation. This is one reason why certain hair colors are more common, simply because they are dominant in the species.

You should know that phenotypes are extremely varied when it comes to guinea pig breeds and colors, according to research studies. In fact, color fluctuations are quite common even when guinea pigs with the same genotypes (combination of genes) are examined. This likely has to do with the complex hereditary background of each guinea pig.

Interestingly enough, research has been conducted since before the 1940s on guinea pig hair, color variations, and genetics. We can, in part, thank guinea pigs for helping scientists understand phenotypes, genotypes, and the inheritance of specific traits.

The Most Common Colors Of Guinea Pigs

Now that we have the scientific stuff out of the way, let’s take a look at some of the most common guinea pig colors. Each guinea pig color has its own specific name to describe it.

Beige is one of the lighter guinea pig colors and is described as a light brown with yellow tones. This variation is similar to the color of light khaki shorts or pants.

Cream is another common hair tone and is just a few shades lighter than beige.

The black and chocolate are two very similar colors and are the darkest ones seen on guinea pigs.

It can be difficult to tell the difference between the two, but chocolate has a slight brown tone while black does not.

However, some black coloring may appear with a dark tinge of blue. This color is called blue or blue-black.

Red hair color is a deep brownish red and similar to the liver coloring you would see on a bloodhound. This color is just a bit darker than the yellow-toned gold that is commonly seen.

In addition to gold, you may see a lemon color, which is similar to cream but with more of a yellow tint. A warm honey-brown may be seen as well.

Lilac is one of the more unique colors you may notice. While the color may look gray at first, you can see streaks of violet or purple on closer inspection.

Of course, white is also a tone you will commonly see on your guinea pig.

Some guinea pigs are solid in color. American guinea pigs, with their fine and short hair are often one single or solid tone. This type of coloring is called “self.” So, if your guinea pig is a all black, then he would be called a self black cavy.

Interestingly enough, guinea pigs that are all black will also inherit black eyes as this is a dominant trait that is established in guinea pigs with a self black covering.

Speaking of eyes, self chocolate pigs will have brown eyes and beige ones will have pink eyes. If you think you have a self colored guinea pig and notice that the eyes are not the correct shade (like a chocolate cavy with pink eyes), then the coloring likely is not a self one. Your furry friend may have a solid pattern instead.

Several hair colors will be present, but the difference is that variations will occur in each hair strand. This is called agouti and your piggy may look speckled. This is the case because the base of the hair is one color while the tip, or ticking, is another.

An all over solid agouti pattern is most often seen in wild guinea pigs.

However, you may see a slight variation of this in domestic animals with an argente pattern. An argente guinea pig is one with an agouti pattern across the majority of the body, but the belly is a solid color. The belly will match the ticking or the tips of the hair. For example, if the ticking is white, then the belly will be white as well.

Now that you know a little bit about the solid colors, you might want to know a bit about multi colored guinea pigs. After all, the majority of domestic guinea pigs are seen with two, three, or more colors.

Like solid colored cavies, there are some common patterns you are likely to see, with brindle being the most distinct. Brindle piggies have a light, solid coloring with darker bands that run across the body.

While some two colored guinea pigs may appear brindle, they may actually have a broken pattern instead.

Broken refers to a patched coloring with large blocks of color that alternate with sections of white hair. While broken cavies typically appear with geometric or circular blocks of color, you may see banding too.

However, your furry friend will only be a brindle if banding is consistent throughout the entire body. Otherwise, he will be a broken patterned one.

Tortoise shell and dutch patterns are similar to broken ones. However, a tortoise shell animal will have patches of red and black hair towards the front of the body. These patches sit in larger sections of white hair.

The Dutch animals have patches of white and brown or white and red covering the body.

With such an astounding variation in color and pattern, it may seem odd that certain color combinations would be unique. However, there are a few distinctive patterns that are considered “rare.” This is true of the white crested pattern.

White crested guinea pigs are self colored animals that are almost completely covered in a single hair tone, like honey-brown or black. The cavies feature a white tuft or crest of hair on the top of the head though.

The crested pattern is rare simply because the white crested guinea pig breed itself is a rare one.

Dalmatian patterns are rare as well. Dalmatian guinea pigs have a very similar pattern to canines with the same name.

Basically, the animal is white with dark spots. Two guinea pigs with the dalmatian coloring need to breed to produce offspring with the same pattern.

Unfortunately, the breeding can result in the production of a lethal white guinea pig. This is the name for a deformed cavy that cannot survive. One in every four babies born from a breeding pair of dalmatians will be deformed. For this reason some people feel it is not moral to mate two Dalmatians together at all.

Perfect examples of patterning are often rare as well.

These cavies appear with “show quality” coloring. Pattern and color standards are outlined by various organizations like the British Cavy Council.

There are many different colors of guinea pigs, as you have learned. These variations make the animals unique and interesting to look at.

Do you have a uniquely colored cavy or do you have one with a “show quality” coat? We want to know, so go ahead and leave us a note in the comments below.

MONTEE R. BAKER AND A. C. ANDREWS, THE MELANINS. I. STUDIES OF THE HAIR PIGMENTS OF THE GUINEA PIG, Kansas Agricultural Experiment Station, Manhattan, Kansas July 21, 1943