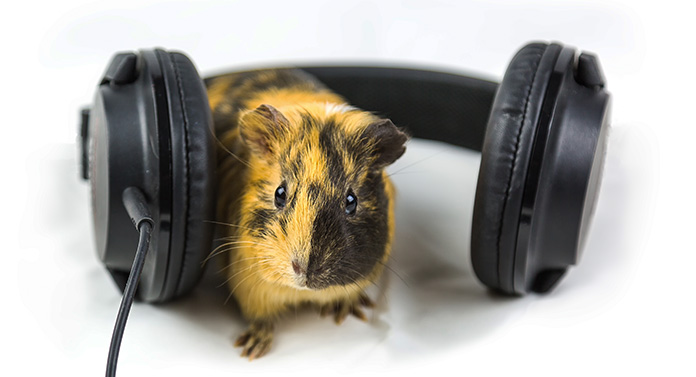 Guinea pigs make and understand a complex range of sounds.

Typical guinea pig noises range from happy chirps and purrs to angry chattering and even hissing.

And each of these sounds has a specific meaning to other piggies.

But can we learn to understand our cavies too?

In this article we take a look at guinea pig sounds and what they mean, to help you understand your furry friend’s mood.

Why Do Guinea Pigs Make Noise

According to the American Cavy Breeders Association, there are 13 recognized guinea pig breeds. And all of them, from Peruvian to Skinny pig, do most of their communicating through the same set of sounds.

Just like other animals, guinea pigs make noises to communicate both with one another.

They also make noise to communicate with humans. For example, a guinea pig squeaking in long whistles to its owner is communicating hunger or excitement. We call this ‘wheeking’.

Perhaps the most common guinea pig sound, a guinea pig’s familiar squeak is also known as a wheek.

A wheek is just what it sounds like: a high-pitched squeak or whistle that may intensify when a guinea pig sees its owner.

It’s possible that only pet guinea pigs wheek. This type of guinea pig squeaking is a very specific to humans bringing food. In the wild, guinea pigs find their own food, and wheeking is unlikely to occur.

What Does It Mean When A Guinea Pig Purrs?

However,a higher pitched purr, or a purr on a rising pitch, may actually be a sign of annoyance.

Squeaks and Nibbles guinea pigs often purr when they have a bit of a tiff. It’s more of a warning to back off then a happy greeting.

However, purring sounds a lot like rumbling. Which is something rather different!

Rumbling is a less common sound, especially if you only live with one guinea pig. Similar to a purr – but a bit lower in pitch.

A guinea pig ‘rumbling’ is preparing to mate.

If you have male guinea pigs in a separate cage to females, they will make this low purr when they see them through the bars.

When Squeaks and Nibbles’ piggies are put on the lawn in their separate cages too close together, the boys will purr and chew at their bars to try and reach the ladies. So we try to keep them further apart most of the time to avoid stressing the males.

Chutting is another happy guinea pig sound. It’s described as a series of short guinea pig sounds emitted in rapid succession. This sound is often heard when a guinea pig is happy or relaxed, especially when the animal is exploring a safe new environment.

Squeaks and Nibbles’ guinea pigs make these noises a lot. Especially when they are enjoying tasty snacks on the lawn. You can see and hear them here:

Not all guinea pigs will make this noise. In fact, the chutting sound is apparently somewhat rare. Some guinea pigs never make the sound, while others do it often.

If you hear your guinea pig make this sound, don’t be alarmed. You have a special piggy, that is happy to be in your care.

Chirping is the least understood of all the guinea pig sounds. It’s a repetitive, high-pitched squeak that sounds just like birds chirping.

You may notice your guinea pig seems a bit ‘spaced out’ while making this noise.

No one is quite sure what it means, which makes guinea pig chirping a really interesting noise. Rest assured that while there is not yet a translation for this sound, it’s completely normal!

Teeth chattering is a common guinea pig noise, and it is also perhaps one of the most important. It’s a sign your piggy is stressed and annoyed.

Guinea Pigs often show their teeth when making this noise, described as “a rapid series of squeaks and gnashing of teeth.” If your guinea pig does this, it’s best to stay away until it calms down.

If your guinea pigs are chattering their teeth at each other, you might like to take a look at our article on why guinea pigs fight.

When dogs whimper and cats yowl, it’s pretty easy to understand that they’re in pain. The same goes for a human cries.

Likewise, a guinea pig shriek means that the animal is in physical pain. The high-pitched peal will be an unmistakable sign that all is not well with your pet.

If you hear it, check to make sure your guinea pig is safe.

Just like teeth chattering, hissing and whining are signs to stay clear of your guinea pig for a while.

Hissing is just what it sounds like, while a whining guinea pig will emit a high-pitched squeak.

In either case, your guinea pig is annoyed. Give them a little time to calm down before attempting to make friends. When you return, bring a bit of apple or a strawberry to help smooth things over!

Guinea pigs are delightful pets that can bring entertainment to any household. The experience is made all the richer when humans take the time to get to know their guinea pig sounds and their meaning.

Knowing which of your guinea pig’s noises are happy ones, and which are a sign of annoyance or distress, will make you an even better piggy parent for your furry friend.

If you have a guinea pig that loves to communicate, why not tell us about them in the comments below.