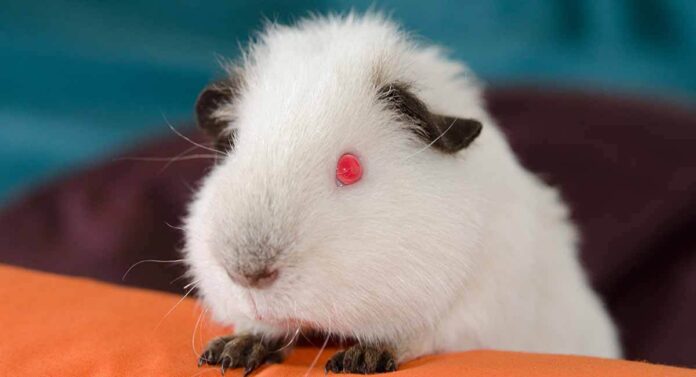 The Himalayan guinea pig is an average sized white guinea pig with black or chocolate points. They have a short, easy to care for coat, and are known for their friendly personalities.

Let’s take a look at how to care for a Himalayan piggy, how they might be different from other guinea pigs, and help you decide whether this is the right pet for your family!

Our readers’ most popular and frequently asked questions about the Himalayan Guinea Pig.

What’s in this guide to the Himalayan guinea pig

What Is A Himalayan Guinea Pig

While dogs and cats remain America’s favorite pet breeds, small rodents, including guinea pigs, are a popular choice among many. These pocket-sized critters are cute, personable, and relatively easy to care for.

There are several guinea pig breeds to choose from, with the American Guinea being the most common. Today, we’ll look at a lesser-known variety: the Himalayan guinea pig.

Guinea pigs breeds in general are viewed as being quite similar. Let’s take a look at some of the differences that can be found in the Himalayan.

Where Does The Himalayan Guinea Pig Come From?

Based on the name, you might think that the Himalayan guinea pig comes from southeast Asia. As a matter of fact, like other guinea pig breeds, history indicates that they originated in South America.

The Himalayan got his name because of his unique markings and colorings, much like a Himalayan cat. They’re also often referred to as “the Siamese cat of guinea pigs,” for the same reason. 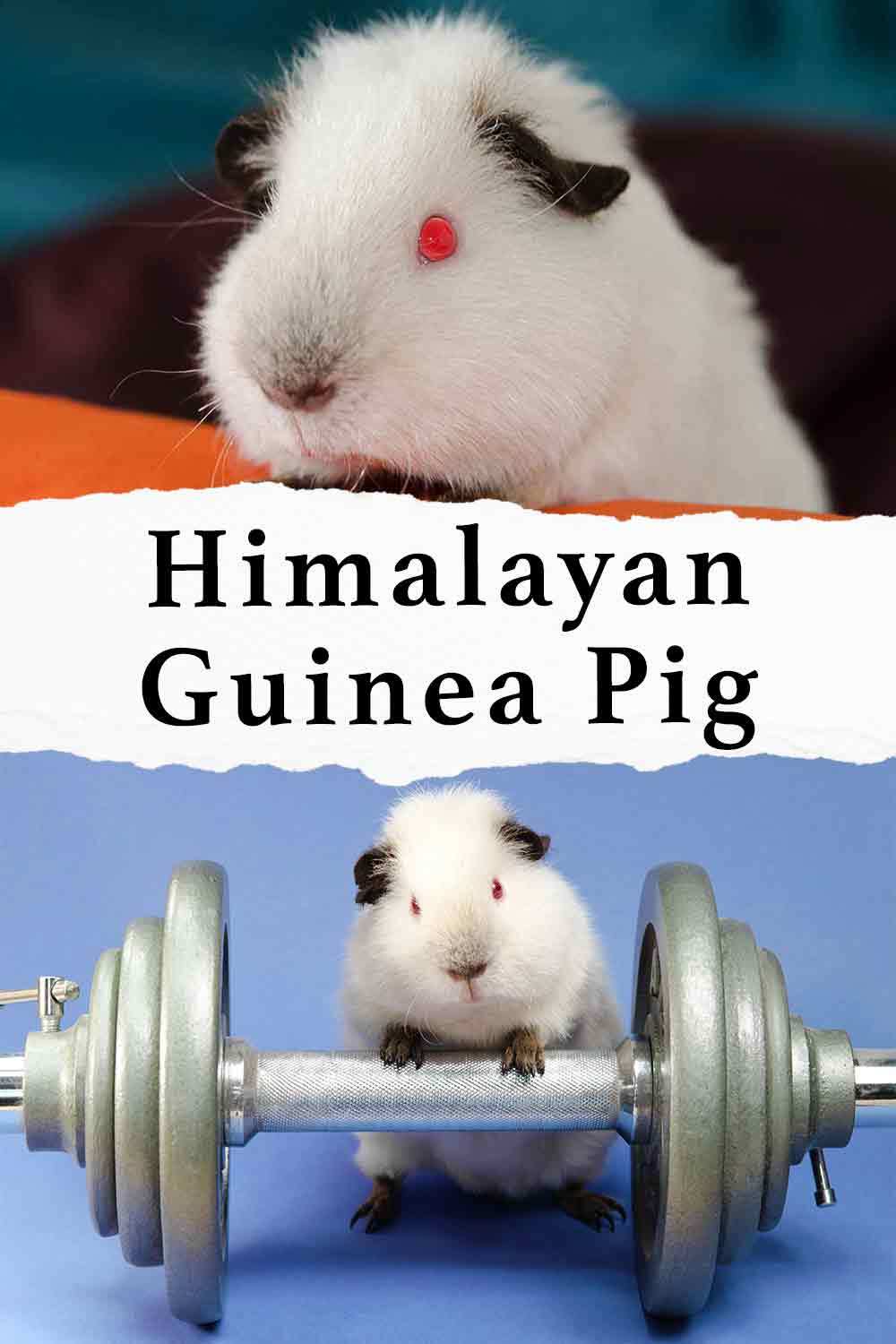 Himalayan teddy guinea pigs are actually classed as albino, although they do have colored markings (called “points”), usually on their nose, ears and feet. They have a lifespan of 5-7 years, and generally make good, sociable pets.

Himalayan guinea pigs have short to mid-length hair. They are relatively easy to groom when compared to their long-haired counterparts, such as the Peruvian guinea pig.

This is a normal part of the Himalayan’s biology. However, you should still take steps to keep your pet in a room with a steady, moderate temperature. Also, avoid exposing your guinea to direct sunlight.

Himalayan teddy guinea pigs are average in size, typically ranging from 8 to 12 inches when fully grown.

They have a short, thick body with broad shoulders.

This is considered an albino breed; however, they do develop some color pigments in certain areas.

Himalayans are born completely white, with characteristic red-tinted eyes. As they grow, they will develop colored spots, called “points.”

These points typically appear on the ears, nose, and feet. It may be several weeks to several months before points begin to develop.

The “points” are typically black, although brown/chocolate tones are also possible.

Interestingly, the colored spots on a Himalayan can disappear if exposed to too much direct sunlight.

They also fade when the pig is stressed or scared.

Apart from the points, another way to tell a Himalayan from other breeds is to look at the shape of the ears. Himalayans have a noticeable curling at the ears.

These are sturdy, friendly animals for the most part. When handled correctly, they enjoy spending time with their owners.

They are usually good with children, but can be frightened easily.

Himalayan guineas typically get along well with other guinea pigs, but there is always some risk that they will become territorial.

If you want multiple pets, it’s best to purchase guineas in pairs, rather than introducing a second guinea later on.

Guinea pigs in general rarely bite — at least not hard.

They may decide to nibble at the person who is holding them, just out of curiosity. But they are very rarely aggressive.

However, it’s always a good idea to take precautions to keep your pet from being scared needlessly.

If children will be handling the guinea pig, make sure that an adult is present and can supervise to ensure careful, gentle treatment.

Himalayans, like other guinea pig breeds, may be a little skittish when they first get to know you, or in new and unfamiliar environments or circumstances.

If your new pet seems stand-offish or upset, speak to them in low, calm tones. Let them get used to their surroundings before you try to scoop them up. Avoid making sudden movements or loud noises. 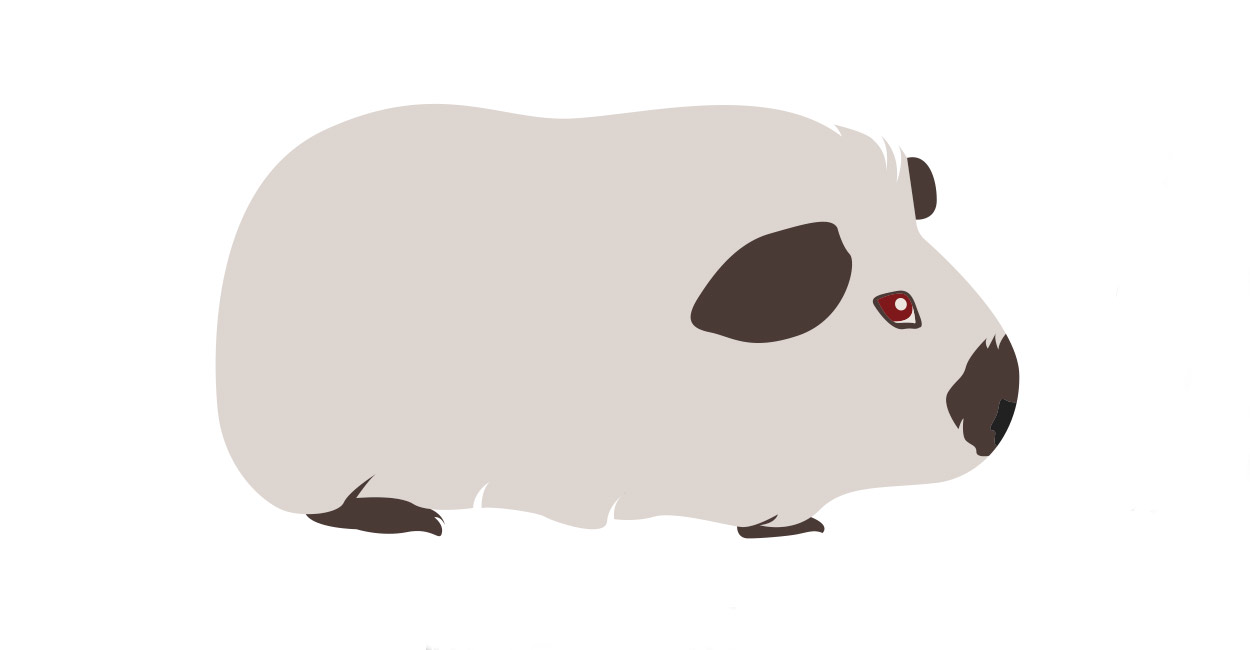 It may take a little while for your new pet to grow accustomed to you and come to your hand to be held and cuddled. A good way to help the process along is to ensure that your pet associates your presence with good things, like food.

Try feeding your new cavy by hand, and this will create a direct link between you and a reward. It may take some persistence, but it will pay off!

We recommend handling your guinea pig daily, in order to check for any potential health issues. Guinea pigs do not do well with stress, and their health can rapidly deteriorate if an issue is left untreated.

It’s a good idea to find a veterinarian in your area that is familiar with treating guinea pigs. Establish with them early on so if anything comes up you can get in immediately.

That said, they are susceptible to many of the health problems that all guinea pigs are prone to, including the following.

Considered the most common guinea pig health concern, most breeds of guinea pigs are prone to pneumonia and other respiratory infections.

Environmental stress can increase the risk of infection, which is why proper care is so vital.

Guinea pigs have sensitive dietary tracts, and are therefore prone to diarrhea and other gastrointestinal issues.

Make sure you feed your pet a balanced, healthy diet appropriate for guineas in order to reduce the risk of complications. 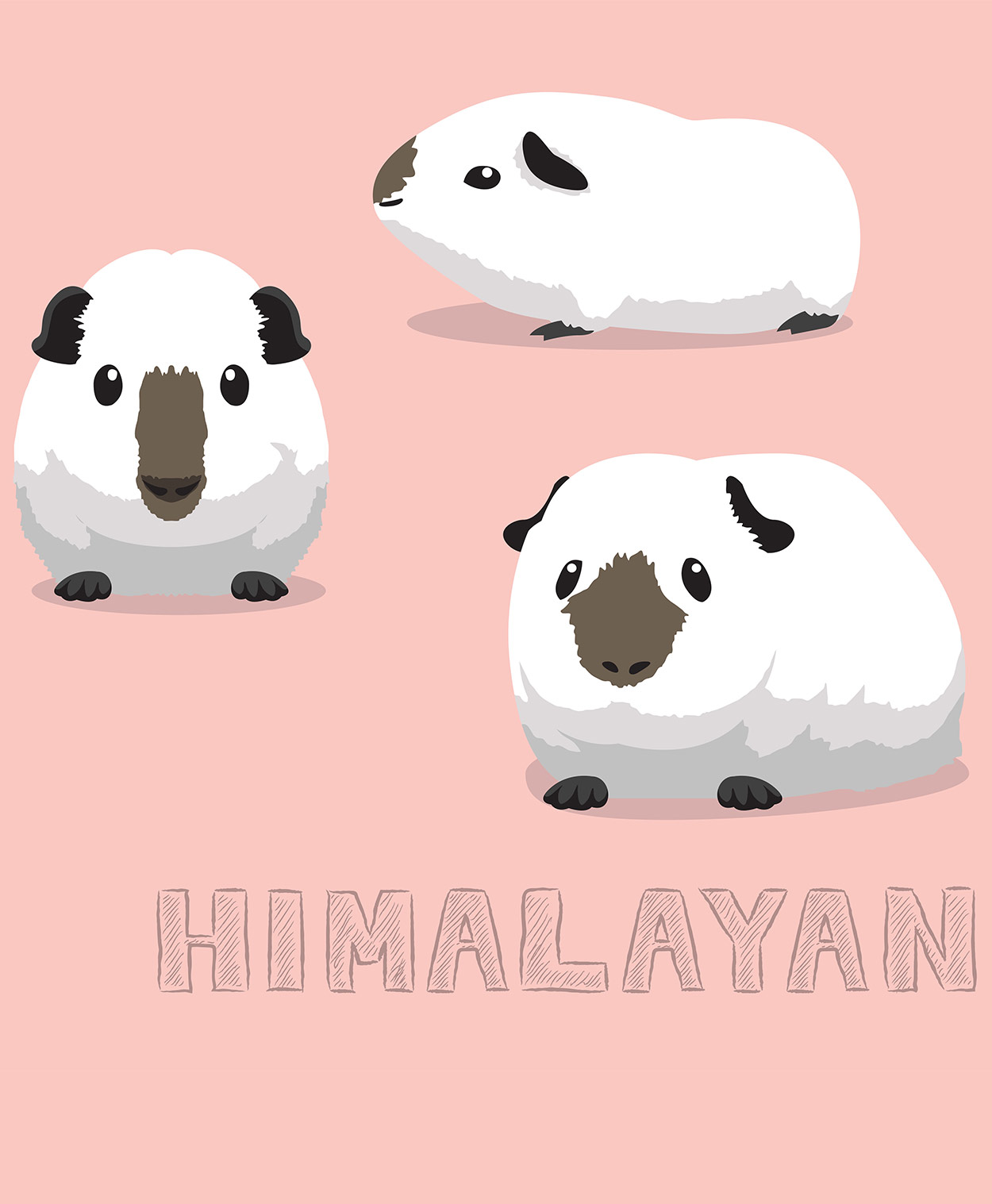 Guinea pigs need a lot of vitamin C in their diets (between 10 and 50 mg per day).

You should feed your guinea fresh fruits and vegetables daily, as well as vitamin C-enriched pellets or feed.

If you notice a rough coat, a lack of appetite, swollen feet or joints, or diarrhea, these are likely signs of a vitamin C deficiency.

Guinea pigs tend to be prone to urinary calculi (stones) and bladder infection.

Females are more at risk for infection, while stones are common in both sexes. Signs of possible urinary problems in guinea pigs include anorexia, difficulty urinating, blood in the urine, and a hunched posture.

Ringworm and other fungal skin infections are common in guinea pigs, particularly in young guineas.

Guinea pigs may also be susceptible to tumors, parasites, abscesses due to infection, and barbering (when the guinea chews its own hair).

In addition to these issues that are common in all types of guinea pigs, Himalayan guinea pigs are uniquely susceptible to issues relating to weather changes. They do best in moderate, steady temperatures, and should not be exposed to direct sunlight or extreme temperatures.

It’s recommended to take your guinea to the vet once a year for a regular checkup. If you notice any concerning health problems in between checkups, seek veterinary care immediately.

Himalayan Guinea Pigs have an average lifespan of 5 to 7 years, when cared for properly.

They are typically healthy critters, although they are susceptible to the health problems that commonly affect most breeds of guinea pigs.

Guinea pigs might have a bit of a reputation for being whiffy pets, but it’s generally more about the conditions in which they live rather than the animals themselves.

A regular schedule of grooming and care will help out with odor issues — as well as general health and well-being. You can follow this recommended schedule to keep everything in order.

You can also opt for odor-control bedding as a way to help prevent any potential issues.

Guinea pigs in general can be a little territorial. If you’re interested in having more than one, it’s recommended that you get a pair from the very beginning.

Introducing another guinea pig, whether Himalayan or another breed, can be difficult and stressful for everyone involved.

If you want multiple guinea pigs, make sure that you get a cage that gives them both plenty of room.

Baby Himalayan guinea pigs average around 3-5 inches at birth. They will nurse for three to six weeks, but can have solid food from a surprisingly early age — even after the first 24 hours!

You’ll want to keep the babies with their mother until they’re about three weeks old. Then, it’s time to separate the males from the females, or you might end up with even more babies almost immediately!

If you find a local Himalayan guinea pig breeder in your area to purchase a baby from, be sure to ask them about their experience with breeding, the health of the pig’s parents, and if the breeder conducted any sort of health tests on the animals.

Guinea pigs are prone to a variety of health problems, many of which are difficult to predict in advance. With that said, proper care during the breeding process is essential to the animal’s health, so it’s important to find a reputable breeder.

The average price for a guinea pig, regardless of the breed, can range anywhere from ten dollars to forty dollars — with some margin for error on the far side!

It depends largely on where you purchase your guinea pig. Adopting one from a shelter will generally be cheaper than purchasing one from a breeder.

As Himalayans aren’t the most common breed of guinea pig, you may have to search for one. And the cost may be on the higher side of the average range.

It may be difficult to find a Himalayan guinea pig at a rescue.

They’re not quite as common as some other breeds, and many rescues aren’t specific to a certain breed. However, you very well might stumble across a Himalayan through a shelter or a site like PetFinder.

If you’re drawn to the Himalayan, you may be looking for a guinea pig with similar temperament, sizing, and ease of grooming.

Here are a few other similar breeds that you may come across.

Comparing The Himalayan Guinea Pig With Other Pets

Are you set on a guinea pig? Or are you thinking about another similar pet?

You might be unsure of the differences between a guinea pig and a hamster. Which one will best suit you as a pet?

Take a look at our article on the hamster vs. guinea pig, and you may find out what you’re really looking for!

Is A Himalayan Guinea Pig Right For Me?

Himalayan guinea pigs make great family pets. They are friendly, sociable, and relatively easy to care for due to their short hair.

With that said, we would not recommend a Himalayan to anyone living in a very hot or very cold climate. This breed is highly susceptible to weather changes, and does not react well to extreme temperatures.

Also, Himalayans do best indoors. If you are intending to keep your pets outside (which is not typically recommended, in general), it’s best to avoid the Himalayan breed.

Do You Have A Himalayan Guinea Pig?

Do you have a Himalayan guinea pig living at home with you? We’d love to hear all about them in the comments below.