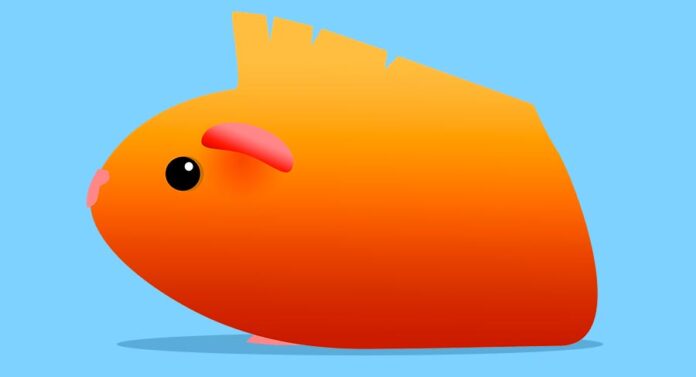 The Ridgeback Guinea Pig gets their name from the pronounced ridge of fur that runs all the way down their spine.

Other than this ridge, these cavies will have short, smooth coats.

Like other cavies, the Ridgeback guinea pig breed will need gentle handling from a young age, lots of company, and plenty of space to exercise.

Are you thinking about bringing Ridgeback piggies into your family?

What is a Ridgeback Guinea Pig?

A Ridgeback guinea pig is also just known as Ridgeback. This is an official guinea pig breed in the UK.

However, it is not yet recognized by the American Cavy Breeders’ Association.

So, there’s a chance that you’ll have a slightly harder time finding a Ridgeback in America.

But, they have the same general care needs as any other guinea pig breed.

The Ridgeback guinea pig breed is recognized under the ‘New and Emerging’ category by the Rare Varieties Cavy Club.

So, it’s natural to think that this is a rare guinea pig breed, especially if you haven’t seen one in person before.

On top of this, we know they are recognized by the British Cavy Council, but not the American Cavy Breeders’ Association.

So, there’s a chance that cavy-lovers in America will struggle to find Ridgebacks more than those in the UK.

However, the Ridgeback is quickly growing in popularity.

So, you shouldn’t be too surprised if you start to see more of them about.

A Ridgeback guinea pig is set apart by their coat. They have a smooth, short, soft coat over their entire body.

But, along their spine, from their ears to their hips, their fur stands up in a ridge. This ridge of fur is usually about an inch tall.

It is recognized in Agouti and Argente colors.

But, if you don’t choose a show-bred Ridgeback, you may notice some variation like brindling in the fur.

Other than their interesting fur, Ridgebacks have large, drooping ears, bright eyes, and a gently curving head.

So, what can you expect if you bring a Ridgeback home?

Ridgeback guinea pigs are usually calm but inquisitive. It’s important to handle them gently from a young age so they feel happy and safe when picked up.

This easy-going personality is part of the Ridgeback appeal!

Like other cavy breeds, Ridgebacks have high social needs, and are happiest when living with at least one other guinea pig.

Since they are also quite curious little cavies, they benefit from daily mental stimulation.

If you have children at home, make sure you teach them to be gentle with your Ridgeback to avoid any fearfulness from your cavy!

It’s important to keep your guinea pig’s housing clean. Avoid housing with wire or abrasive flooring, as this can lead to chronic dermatitis on their paws.

Like other breeds, the Ridgeback needs constant access to fresh water. Clean their food bowl regularly, as well as their housing and bedding as a whole.

Hay and fresh grass should make up the significant part of your piggy’s diet. These fibrous foods to grind down their ever growing teeth.

But, fresh leafy greens, and guinea pig-safe fruits and vegetables should also make up part of their diet.

Ridgebacks are prone to the same common health issues as many other guinea pig breeds.

Since their teeth are constantly growing, they are vulnerable to ulcers, abscesses, and poor dental health if they do not have enough opportunity to chew and grind down their teeth.

Guinea pigs, like humans, cannot produce their own vitamin C. So, they must receive this nutrient in their diet. Without it, they can develop health issues like scurvy.

Other common problems include:

Look out for any behavioral changes in your guinea pig, or any signs of distress. If you’re at all concerned, it’s a good idea to take your Ridgeback to the vet for a checkup.

Where Can I Find a Ridgeback Guinea Pig?

The best place to find a Ridgeback guinea pig is through a reputable cavy breeder.

This is the best way to ensure the health of your Ridgeback guinea pig!

Since they are not yet a recognized breed in America, you may struggle to find a Ridgeback guinea pig.

But, the breed is quickly growing in popularity thanks to their gentle temperament and interesting fur.

So, it may not be as hard as you think. Speak to reputable breeders about what you’re looking for. If they can’t help you, they may be able to put you in touch with someone that can.

If you love the sound of the Ridgeback guinea pig, but are struggling to find one, or perhaps just want to learn more about other breeds, we have some great guides to help you.

Here are some other interesting guinea pig breeds.

The Ridgeback is laid-back, friendly, and inquisitive, especially when handled well from a young age.

They get their name from the ridge of fur that runs all the way down their spine.

Are you lucky enough to own a Ridgeback? Or are you on the hunt for one to welcome to the family?