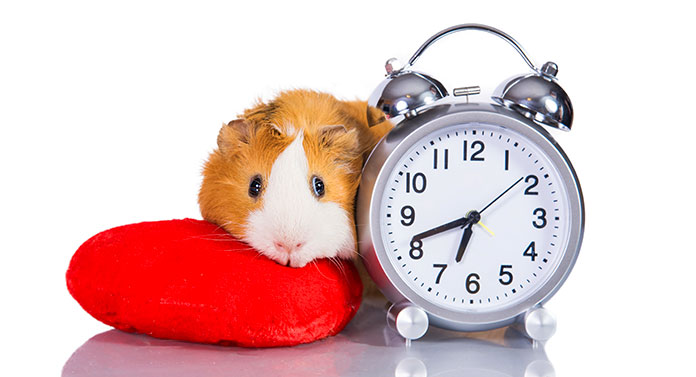 When do guinea pigs sleep? Guinea pigs have slightly unusual sleep patterns. They will simply nap whenever they get the chance to – whether this is during the day or the night.

The majority of their naps will take place in the evening, partly because of how cavies have adapted to live with humans.

These little pets will usually sleep with their eyes open, and can get up to 9.5 hours of sleep in a 24 hour period.

Let’s take a closer look at the unusual guinea pig sleeping pattern, and find out why they get their rest like this!

Guinea pigs are wonderful pets with gentle demeanors and friendly attitudes. Their loving natures and cute faces can make anyone perk up after a tough day.

You might have noticed that your guinea pig always seems to be awake and ready to greet you. In fact, it may seem as though your pet does not sleep at all.

But guinea pigs get a lot of sleep – you just may not notice it. So let’s answer some common guinea pig sleep questions, including: do guinea pigs sleep at night?

The Importance of Sleep

While sleep is essential for all mammals, sleep patterns and needs vary widely between species. In fact, the term “varies widely” is quite the understatement.

Research suggests that this variation has a lot to do with the different metabolic rates and energy reserves of animals.

For example, since humans have a moderate metabolism and ability to reserve energy, they sit smack dab in the middle of mammalian sleep needs at around eight hours a night.

Rodents like rats, mice, and even guinea pigs have fast metabolisms and use a great deal of energy.

So, they need a lot of sleep in order to replenish this energy.

Their different sleeping patterns are linked to the lengthy domestication of guinea pigs.

Cavies have been domesticated for well over 4,500 years (a really long time, but not nearly as long as the domestication of cats and dogs).

Studies suggest that this domestication has led to many changes in the natural characteristics of the guinea pig.

Simply put, the animals have changed their sleeping habits to adapt to life with humans.

How Long Do Guinea Pigs Sleep

As we’ve already learnt, guinea pigs have fast metabolisms, just like other rodents.

So, you might be surprised at just how much sleep they need to function normally.

It may be shocking to learn that your pet guinea pig sleeps more than you do if you have never actually seen your furry friend sleeping.

They really only do this when they go into the REM stage of sleep.

However, since the animals really only need about one hour of REM sleep, you can expect your guinea pig to only rest for a little over one to two hours, at most, at one time.

If you’ve never seen your guinea pig sleeping, you might wonder when they get their rest. Do guinea pigs sleep at night or in the day?

The vast majority of rodents, like rats and hamsters, are nocturnal, meaning they sleep during the day.

However, squirrels and some mice are crepuscular, meaning they are active in the early morning and evening. In general, rodents and other prey animals will sleep when nearby predators are out hunting.

Guinea pigs are oddballs when it comes to their sleep patterns though, because they do not primarily sleep during the day or sleep at night.

They simply take naps when they can. In this way, the animals are a lot like cats that snooze a bit during the day and also in the evening.

This type of sleeping behavior is common amongst carnivores that sit high up on the food chain. Since carnivores do not have to worry about predators, they can sleep in broad daylight.

However, guinea pigs are far from the top of the food chain. In fact, wild South American guinea pigs have numerous predators that include hawks, wolves, snakes, and owls.

But, your furry popcorning rodent friend is a distant cousin of his South American ancestor.

Do Guinea Pigs Sleep At Night?

If you think about the way your cat snoozes, then you probably consider all of the “cat naps” your feline takes.

Guinea pigs nap in the same way, and like your cat, they do take a large portion of these naps in the evening.

Since guinea pigs have adapted their sleep schedules to living with their human companions, it naturally makes sense that your piggy would get the majority of his sleep at night.

This is typically when your guinea pig will fall into his daily hour of REM sleep. REM sleep is extremely important for all animals, because it is when the body is able to restore itself.

Why Do Guinea Pigs Sleep With Their Eyes Open?

Guinea pigs often sleep with their eyes open. In fact, they rarely close their eyes at all.

This is instinctual and it helps the rodents remain alert and ready to flee at a moment’s notice.

Guinea pigs, like other rodents, are prey animals after all and must remain vigilant against predators if they want to stay alive.

Since your furry pal sleeps with his eyes open, you do see your guinea pig sleep. You just do not realize it.

Like most other people, you probably thought that your piggy, like maybe some of your other pets, slept with his eyes closed.

And there are times when this may happen.

When Do Guinea Pigs Sleep With Their Eyes Closed?

On occasion, you may see your furry pal close his eyes, either partially or fully. This is a rare treat, and one that you should savor if your piggy chooses to do this.

Guinea pigs can and will close their eyes, but only if they feel completely safe and content in your presence.

In other words, your pet truly trusts you if he chooses to sleep with his eyes closed.

Expect to notice this more as your pet ages and you build a stronger bond with your guinea pig.

Squeaks and Nibbles’ resident five-year-old guinea pigs regularly nap with their eyes closed. Especially after a long day of munching grass in the backyard.

How Do Guinea Pigs Sleep?

Sometimes guinea pigs will take short naps that only last a few minutes.

If you see your guinea pig standing completely still, then he is probably resting.

The animals may also lie their heads down gently, lie on their sides, or burrow in some bedding when they decide to catch a snooze.

But, it’s most common that they will snooze in small bursts whilst standing very still. In fact, there are times when lying down can be a sign of something more serious.

If you see your pet lying down for several hours during the day and night, failing to take a treat by hand, or sulking in a corner, then these are all signs that your guinea pig is ill.

It is wise to seek out medical care with the help of a veterinarian as soon as possible.

While viral infections are uncommon in guinea pigs, bacterial, fungal, and parasitic infections are a serious concern. According to the Merck Veterinary Manual, respiratory conditions like bacterial pneumonia are problematic, especially in the winter.

The infections can cause lethargy and even depression, and this can easily explain why your piggy may be sleeping more than he should be.

Most infections can be treated successfully and your fuzzy pal will be
“wheeking” with joy before you know it.

However, infections can also be deadly, so you should always seek out veterinary care if you are concerned about your pet.

Can Guinea Pig Diets Cause Sleepiness?

If you have a sleepy guinea pig, then you may be wondering if there is another cause of the lethargy. Especially if you are not witnessing any other obvious symptoms like heavy breathing or coughing.

Well, you might want to take a closer look at your furry pal’s diet. Specifically, lethargy is commonly linked to a vitamin C deficiency. The deficiency can cause some muscle and joint pain, and this can lead to inactivity and malaise.

While many commercial guinea pig foods do contain a good amount of vitamin C, the storage of the food in damp, bright, and warm spaces can greatly reduce the content of the nutrient. Also, the age of the food can have an affect on the vitamin as well.

It’s really important to use a good quality food and to store it in the right way.

Your veterinarian can complete a simple blood test to check your pet for a vitamin C deficiency. Supplements, treats, and high-quality food can all be suggested to help treat the problem.

As you can see, guinea pigs do sleep. But, their sleep schedule is probably very different than you would expect.

If you notice anything far outside of the 9.5 hour (and somewhat sporadic) sleeping regimen or if you are concerned about whether or not your piggy is a bit more sleepy than he should be, then a veterinarian can help to assess what may be causing the problem.

Do you have your own guinea pig stories to share, or does your furry friend sleep in a cute or unusual way? Share your stories below in the comments.