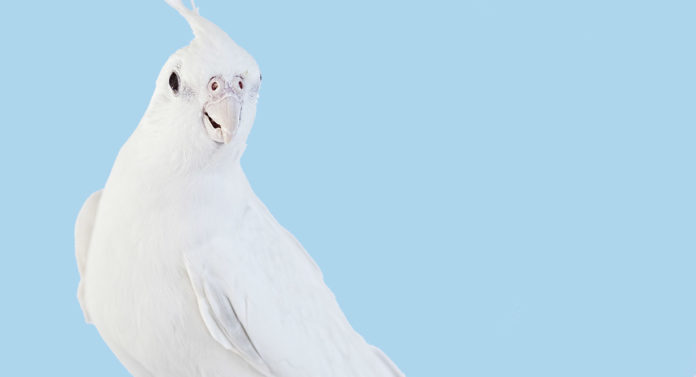 A white cockatiel has white plumage over their whole body. Even their usually yellow crest and orange cheeks are white.

White cockatiels are the result of a very specific combination of genes. But the care and attention they need are the same as any other cockatiel.

Let’s take a closer look to find out if the white Cockatiel is the right new pet for you.

Cockatiels are one of the most popular pet birds in the U.S. With Parakeets being their main competition for the top spot.

These birds are naturally grey in color with a yellow face that has two orange spots resembling blush. And of course, who can forget the majestic crest atop their head?

Since their domestication, Cockatiels have been bred in a number of colors. These include cinnamon, pied, pearl, lutino, as well as combinations of these colors.

You’ll notice we didn’t mention white. Yet you have probably seen white Cockatiels before. This is because the white color comes from one of the shades above.

In this article, we’ll explain what a white Cockatiel is. As well as how it compares to other Cockatiels in terms of behavior, health, and care.

What is a White Cockatiel

Light colored Cockatiels are often referred to as white, or even albino. This is because their coloring often does look white.

But, albino and white are misnomers. The “white” Cockatiel is actually a lutino colored Cockatiel with a white face.

Lutino often describes pastel yellow shades. But this can be light enough to appear white. Especially when paired with a white face.

Most cockatiels have orange spots on each side of their face which is reminiscent of blush. As the wording suggests, white-faced cockatiels do not have this. Instead their faces are completely white.

Since their domestication, many different mutations that alter Cockatiel color have been discovered.

As such, there are a few different terms that are used to describe colors at the genetic level.

The normal color of a Cockatiel is gray with a yellow face and orange spots on the cheeks. This color is genetically dominant to all other colors. And all other colors are considered mutations.

Thus, if you were to mate a normal colored Cockatiel with any other color, all of the babies would be normal in color.

But, the babies would be referred to as “split”. This means they carry the genes for both normal coloring and a mutation coloring.

Simple recessive means that the color is a recessive trait. It will only appear if there are two copies of the gene for said color.

Basically, these birds cannot be mated with a normal-colored Cockatiel (unless that Cockatiel is a split) if you want to produce something other than grey Cockatiels.

The white-faced trait that we mentioned is one of these simple recessive mutations.

Sex-linked colors are passed along on the chromosomes that determine whether the bird is male or female. Female Cockatiels’ sex chromosomes are XY, whereas males are XX. This is the opposite of humans.

Sex-linked colors are also recessive. Which means that they will not be expressed if the dominant grey color is present in their genotype.

So, a “white” cockatiel would need to have two recessive lutino genes (one for females). As well as two recessive white-faced genes to appear as a white bird.

Cockatiels are often described as charming, affectionate, and cuddly.

They are very social birds that live in large groups in the wild. This may be why they bond so well with humans. Often regardless of whether or not there are other birds in the house.

Because of their need for companionship, you should at least consider adopting two cockatiels rather than one.

If you plan on only getting one Cockatiel, then you’ll want to take extra care to provide your bird with the social interaction it craves.

Cockatiels don’t typically mimic human speech like some other parrots. But, they may communicate with you through whistles.

In fact, they can even learn to whistle whole tunes. Just like the bird in this video who performs an Apple ringtone whenever he sees his human getting ready to leave the house.

Despite their impressive ability to mimic tunes, Cockatiels tend to be quiet birds. Which may be part of their appeal for some owners.

We have not found any scientific evidence to suggest that white Cockatiels behave any differently than described above.

Cockatiels can suffer from a handful of health problems. In this section we’ll outline some of the most common health issues Cockatiels face.

The first is a bacteria called Chlamydophila psittaci that is known to cause respiratory troubles. Cockatiels that suffer from this bacteria will shed it in their feces.

They may show signs of weakness or develop enlarged livers. Though it is not uncommon for there to be no visible symptoms of respiratory illness.

Cockatiels can also suffer from an internal parasite called Giardia. Symptoms of this include diarrhea and excessive itching.

Another issue that causes diarrhea in Cockatiels is gastrointestinal yeast infections. Along with persistent, runny stools, birds suffering from this may also regurgitate, have a lack of appetite, and lose weight.

Cockatiels are also prone to obesity. This can cause fatty liver disease that may lead to death. Birds that eat an all-seed diet are at a higher risk for this.

White Cockatiels suffer from the same health issues as other Cockatiels. We are unable to find any scientific research that suggests white Cockatiels are any less healthy.

But, it is known that lutinos (which, remember, is responsible for white) have suffered from bald spots behind their crest.

The issue is believed to stem from early incestual breeding practices and may not appear as commonly as in the past.

This does not harm the bird in any way. But it is considered undesirable in terms of appearance.

A large part of caring for a Cockatiel involves enrichment, which comes from activities such as socialization and play. Just like us, Cockatiels can suffer from boredom.

In some situations, a lack of enrichment can result in destructive behaviors, excessive preening, and increased food intake.

You can help your Cockatiel stave off boredom by taking it out of its cage daily and providing it with a number of resources to keep it busy.

There are many Cockatiel toys on the market. But you can also give them branches, pieces of wood, cardboard, or paper to chew on.

Just make sure that any material you give your Cockatiel is non-toxic and not treated with any chemicals. Learn more about Cockatiel care here.

Get your house in order!

In fact, you will also need to “Cockatiel-proof” your house as these birds are known to chew on anything and everything. And there are many things in our homes that could hurt them if ingested.

When you are busy or away, it is a good idea to leave a TV or radio on for your bird to help keep them entertained.

Aside from enrichment and entertainment, Cockatiels require physical care.

This includes clipping the wing feathers and trimming nails. If you are new to Cockatiel ownership, you can bring your Cockatiel to a vet who can teach you how to perform these tasks at home.

Your Cockatiel should see a vet at least once a year for an annual physical. As well as any preventative care the vet may offer.

White Cockatiels require the same care as other Cockatiels.

The “white” Cockatiel is actually a white-faced lutino Cockatiel that is mistakenly referred to as white or even albino.

Though lutino often results in pale yellow shades, it can be light enough as to appear white.

Cockatiels are charming pets who can be very affectionate with their owners. They are very social animals both in the wild and as pets. You will need to keep them busy!

They love to chew, and providing chew toys is a great way to occupy their time. But, because of this you will also need to bird proof your house as they may try to chew on things when outside of the cage. White Cockatiels are no different in this respect.

Do you have a white Cockatiel? Let us know in the comments!

If you love everything about Cockatiels and other birds, we’ve got some other guides you’ll love! Take a look at them by clicking the links below: 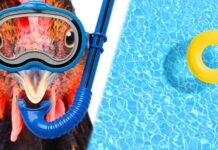 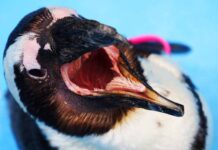 Inside A Penguin’s Mouth 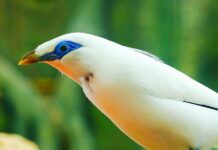