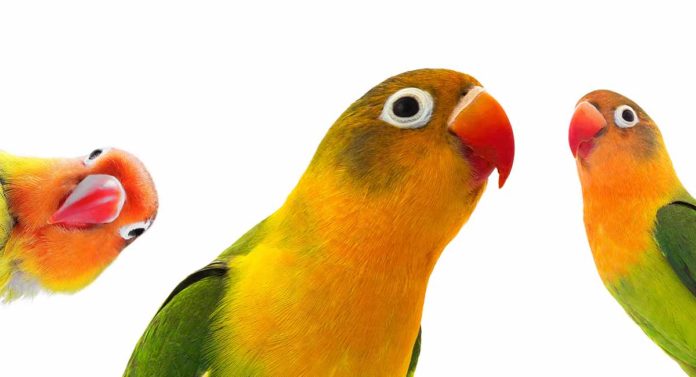 The Fischer’s Lovebird is one of the smallest pet parrot breeds, standing at 5–7 inches tall.

Fischer’s Lovebirds are instantly recognizable by their orange and green plumage, and white rings around their eyes.

Small but fiery, the Fischer’s Lovebird forms an intense lifelong bond with one special person or parrot.

But do these little birds make good pets?

Read on to learn all about Fischer’s Lovebird and how to care for them.

Where Does the Fischer’s Lovebird Come From?

The Fischer’s Lovebird was discovered by German explorer Gustav Fischer in the 19th century. They were first bred in the United States in 1926.

They’re part of the Lovebird family and got their name from the life-long monogamous pair bonds they form.

Although native to east-central Africa and Tanzania, they’ve also been spotted in Puerto Rico, but are believed to be released pets.

The species is considered near threatened largely due to being captured in the wild to be sold in the pet trade. To combat this, export licenses were suspended in 1992.

The Lovebird family are all very noisy, and this includes Fischer’s Lovebirds.

Instead, they tend to just vocalize and chirp. They may mimic simple sounds like doorbells or whistles. But rarely speak.

One of the smallest parrot species, Fischer’s Lovebird are around 5–7 inches tall and weigh around 1.5–2.5 oz.

The standard Fischer’s Lovebird has a bright orange face that fades into green and bluey-brown starting from the back of the neck.

Feathers on the front of the neck are an orangey-yellow and the tummy is a vibrant green.

In addition, they have a distinctive white ring around the eyes and a bright red beak.

There are several color variations that have been bred using mutations which include blue, yellow and albino.

Although small, Fischer’s Lovebirds are outgoing and curious little birds. They require lots of stimulation to keep them entertained and active.

When kept in a pair, Fischer’s Lovebirds will be very affectionate towards one another. They love physical contact and will preen and kiss each other.

They are likely to mate and lay eggs during the breeding season.

Despite popular belief, it’s not always best to keep Fischer’s Lovebirds in pairs.

This is because they become so engrossed in each other that they often aren’t receptive to human contact.

They may even become aggressive towards you if you try to interfere with them.

So, if you want a one-on-one relationship with your Fischer’s Lovebird, it’s best to only keep a single one.

As they form such intense bonds, your Fischer’s Lovebird will become extremely dependent on you if kept by itself.

If not interacted with consistently, they are more inclined to bite.

Something to bear in mind is that female Fischer’s Lovebirds can become highly territorial so are more likely to be aggressive than males.

How to Tame a Fischer’s Lovebird

Fischer’s Lovebirds are not likely to be aggressive which makes them generally easy to handle.

When you first bring one home, it’ll probably be scared and distressed. It might take some time to gain your lovebird’s trust.

And throughout this period, you should respect their personal space. Be very calm and quiet and never force them to do anything.

You can leave the cage door open to encourage it to explore and, after a few days, you can begin putting your hand into the cage to allow it to get used to you.

You can provide your pet bird with treats to show you’re friendly, but it may refuse to eat at first.

Once it becomes used to you, you can begin handling it. The best way to handle a Fischer’s Lovebird is by encouraging it to sit on your finger.

Training is a great way to stimulate your Fischer’s Lovebird and to keep it happy and healthy. It can be a long process, so lots of patience is required.

By far, the best way to train them using positive reinforcement. While treats are a good incentive, too many can cause obesity.

Strokes, kisses and verbal praises will also be effective once you’ve established a relationship with your Fischer’s Lovebird.

You can train it to do a variety of tricks including step-up, whistle, kiss and wave-a-foot.

Because they can be hard to keep happy, Fischer’s Lovebirds are at risk of developing abnormal behaviors such as feather-plucking.

This normally occurs when a bird is distressed or bored.

They’re also at risk of contracting the virus avian chlamydiosis. This causes symptoms like coughing, eye and nasal discharge and diarrhea, and in severe cases can be fatal.

Due to their affectionate and monogamous nature, Fischer’s Lovebirds are at high risk of developing separation anxiety.

You can reduce this by providing them with lots of enrichment when you’re not around.

You will need to provide them with plenty of playtime and interactions to keep them happy and healthy. They will enjoy playing with toys (and destroying them!).

They can live for 15–25 years, so only get a Fischer’s Lovebird if you’re ready for a long-term commitment.

If you get a pair of Fischer’s Lovebirds, never separate them. This can take a huge toll on their mental and physical health.

In the wild, Fischer’s Lovebirds are ground feeders who eat predominantly seeds and fruits. And this diet should be mimicked when kept in captivity.

There are pet foods designed for small birds like Fischer’s Lovebirds. Or you may wish to buy store-bought ingredients and prepare food yourself.

Freshwater should be provided daily.

If you want a pet the whole family can interact with, the Fischer’s Lovebird is not for you.

They form strong monogamous bonds. So, they won’t be receptive to interactions with anyone other than their chosen person.

Sometimes, they may even become aggressive towards others.

They are definitely a huge responsibility and very fragile. For this reason, it’s best not to give them to children.

Fischer’s Lovebirds are independent of their parents at around 5 weeks old.

You should not get one any younger because it will be too early to take them away from their family.

Local bird rescues or exotic animal rescues may hold the Fischer’s Lovebird, so contact them and ask.

Alternatively, you could go to a reputable breeder and buy one.

A responsible breeder will be keen for you to see their facilities and will want to ensure you’re a suitable owner before selling.

Pet shops may sell the Fischer’s Lovebird, but it’s not recommended you buy one from there.

The animals bred in pet shops are often kept in poor conditions and bred irresponsibly.

Never buy a wild-caught Fischer’s Lovebird. The live bird trade is what’s causing their decline in the wild, so stick to captive-bred birds, unless you’re rescuing.

How to Keep a Fischer’s Lovebird

Despite their tropical habitats, adult Fischer’s Lovebirds can live in temperatures as low as 50°F (10°C).

If you live somewhere hot and spend a lot of time in your garden, you may want to consider keeping your Fischer’s Lovebird outdoors.

However, they shouldn’t be left alone for prolonged periods of time.

That’s why you should only consider outdoor housing if you can be by their side for most of the day. Or if you’ve got a pair of lovebirds.

They will benefit from the fresh air but should be kept in a predator-proof enclosure (don’t forget predators can dig underneath cages).

You may even wish to bring them indoors at night to stop nocturnal predators getting to them.

However, when it’s cold, it’s best to house them indoors.

The more room they have to fly, the healthier and happier they will be.

In the cage, you should provide lots of toys and perches. A beak conditioning block should also be present to allow them to maintain their beak.

You may wish to include a little birdbath.

In addition, you’ll need to do a daily spot-clean and weekly disinfectant.

To reduce their stress levels during the transition period, you should prepare for your Fischer’s Lovebird’s arrival beforehand.

For suggestions on toys and enclosures, you could check out this article on the best Lovebird cage options.

Pros and Cons of Getting a Fischer’s Lovebird

The cons of having a Fischer’s Lovebird is that they’re very intense and require constant attention if kept alone.

If kept in a pair, they won’t want to have any interaction with you.

They take a lot of time to train and need to be handled with great care.

You can’t give them to other people to look after when you’re away because they only bond with you.

There’s a chance they’ll have aggressive tendencies and are at high risk of developing separation anxiety.

The pros of having one of them is that they have a naturally lovely temperament. They’re rewarding and affectionate pets.

But only if you have the time to care for them properly.

Is a Fischer’s Lovebird Right For Me?

The Fischer’s Lovebird is a good pet, but only for a very specific type of pet parent. Therefore, they’re not recommended for inexperienced bird keepers.

If you travel a lot or aren’t home for the majority of the day, this isn’t the bird for you.

You must spend a lot of time at home and be happy to dedicate a big part of your day to interact with them.

They are a huge responsibility and are very fragile. So they shouldn’t be given to children as a pet.

Also, if you have other animals in the house that could hurt a bird, you may want to reconsider.

Unless you’re happy to have a more hands-off relationship with your bird, only a single one is recommended, instead of a pair.

Beolens B and Watkins M. 2003. Whose Bird? Men and Women Commemorated in the Common Names of Birds. Christopher Helm Publishing.

Falcón W and Tremblay RL. 2018. From the cage to the wild: introductions of Psittaciformes to Puerto Rico. PeerJ.

Bannerman D. 1953. The Birds of West and Equatorial Africa. Oliver and Boyd.

Dickinson E. 2003. The Howard and Moore Complete Checklist of the Birds of the World. Princeton University Press. 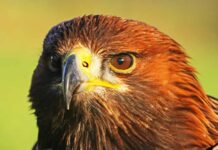 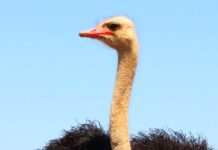 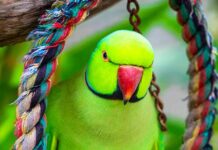